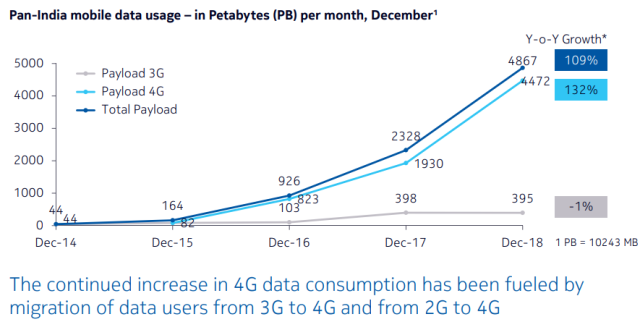 The average data usage grew 69 percent in 2018 to 10GB per user per month in December 2018. Drop in data tariffs coupled with the availability of 4G devices led to the growth of the number of 4G subscribers by 137 percent, Nokia said.

Category B and C circles witnessed the highest increase in 4G traffic in 2018 thanks to the growing popularity of video streaming and video content in local languages on the various Over-The-Top (OTT) applications.

The emergence of media apps, like TikTok, was one of the drivers of an increase in video consumption. WhatsApp and Instagram are the leading social networking apps.

4G data traffic grew 132 percent whereas 3G data traffic remained stagnant with a de-growth of 1 percent as customers shifted from 4G smartphones from 3G phones. 4G data traffic grew across all categories. Category B and Category C circles saw higher growth rates in 2018 than previous year due to network roll out in these circles.

The current broadband penetration in India is at around 45 percent, which is at a much lower level compared to China at 72 percent, and other European nations at around 85-95 percent.

Indian telecoms will need to enhance coverage and capacity in the rural sector to meet customer demand for video streaming services. Nokia did not reveal the Capex of Indian mobile operators for 2018. 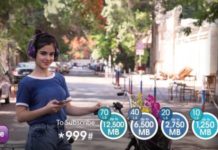