American wireless carrier Sprint today announced 1 GB data offering at a price of $20 against 300 MB from AT&T and 500 MB from Verizon Wireless for the same price.

Sprint, which has 54 million customers as of June 30, 2014, said customers can build their own plan in three steps.

Sprint shared data allowance pack allows users to consume 1GB data for $20 per month for up to 10 lines.

The wireless carrier is also offering data access for phones with unlimited talk and text while on the Sprint Network. Sprint charges $25 per month per line for 1GB through 16GB for the data access for non-discounted phones. 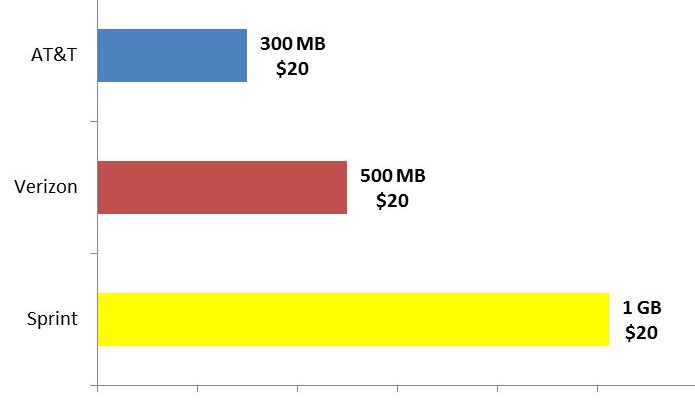 The wireless carrier is offering 20GB of shared data and unlimited talk and text for $100 a month to a family with up to 10 lines through 2015 when customers switch their number to Sprint.

Sprint is offering savings of $60 per month to a family of four as compared with AT&T’s and Verizon’s current pricing through 2015; double the data of AT&T and Verizon; and double the high-speed data of T-Mobile.

Sprint also offers unlimited talk, text and data for $60 per month with the Sprint $60 Unlimited Plan – a $20 savings per month compared to T-Mobile’s $80 unlimited plan.