Telecom Argentina, Telefonica and Claro are preparing their strategies to participate in the spectrum auction in Argentina to buy 90 MHz of 4G spectrum, Reuters reported.

Argentina President Mauricio Macri, since taking office in 2015, seeks to attract investment in the telecom sector to boost competition and improve connectivity in the South American country. The latest telecom regulations allow companies to offer multiple telecoms services in Argentina.

Argentina Government could earn $800 million revenue through the spectrum auction that will enhance 4G coverage. The government will auction spectrum consisting of 60 MHz that telecom operator Arlink received but later returned, and 30 MHz held by state telecoms company Arsat. 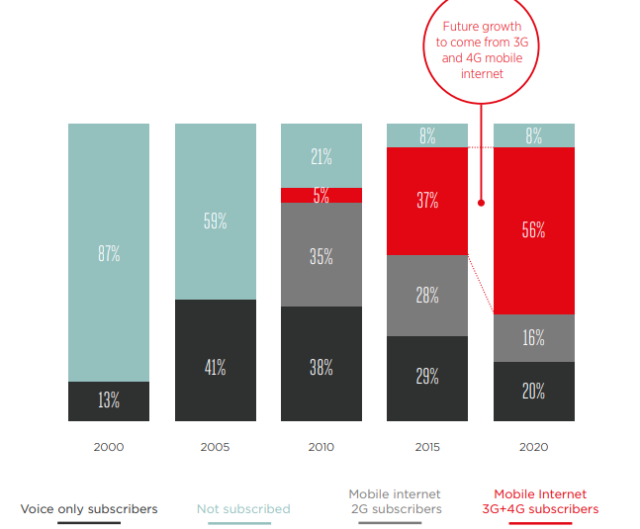 The above chart prepared by GSMA Intelligence shows the forecast on mobile Internet growth on 3G and 4G networks in Argentina.

A spokesman for Argentina’s Modernization Ministry said there would need to be a change to the law to allow the government to auction off the spectrum currently held by Arsat. That could occur around mid-year, either through a law or a presidential decree.

Telecom Argentina, which recently merged with Argentina’s largest cable television provider Cablevision, said in January it would invest $5 billion through 2020 to expand and improve its connectivity infrastructure and communications service. 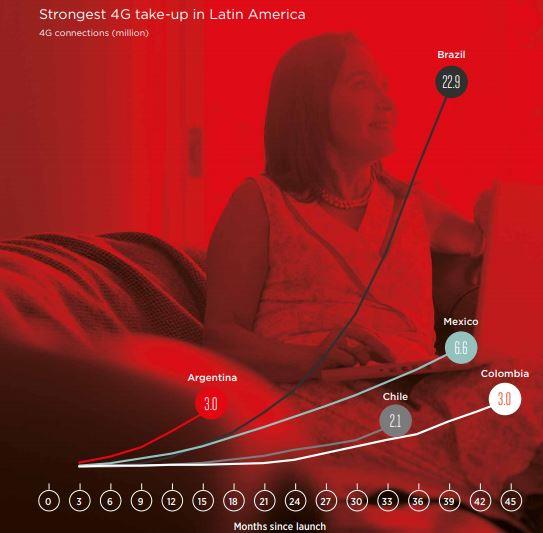 The above statistics provided by GSMA Intelligence indicates that the 4G subscriber addition in main Latin American countries including Argentina and Brazil.

“We view a government spectrum auction as good and necessary, keeping in mind the huge growth in the use of mobile data, with permanent connectivity demand from users,” Telecom Argentina said.

The merged company must return 80 MHz of spectrum to the state given that it now exceeds the 140 MHz limit for a single operator. But the government plans to raise that cap, meaning Telecom Argentina would be able to participate in the auction.

Spain’s Telefonica, the other major player in Argentina’s telecoms market which operates through the mobile phone service brand Movistar, plans to invest close to $2 billion in the country through 2019. Telefonica said in a statement Movistar would be interested in “an eventual auction.”

Claro, owned by Mexican company America Movil, plans to invest some $400 million per year through 2020 to improve service to its 21 million customers in Argentina.

Claro said it has interest in growing and developing the networks that benefit service to its customers, be it through deployment or acquisition of spectrum.

Statista says America Movil’s Claro has 35 percent, Telefonica’s Movistar has 33 percent and Telecom Argentina has 31 percent share in Argentina in the first quarter of 2017.

A recent research report said improvements in mobile networks are anticipated during the next few years following the auction of spectrum in the 700MHz and 1700-2100MHz bands, which increased the available spectrum for operators to 380MHz.

Argentina has reserved 5MHz spectrum for 2G and 3G. The recent telecom licensing guidelines started bringing investment and infrastructure development to the market. The telecom regulator anticipated that the re-assigning of 600MHz spectrum currently used by pay TV operators will boost mobile broadband by mid-2018.