Maxis has another disappointing quarter as the telecom operator in Malaysia reported quarter-on-quarter drop in service revenue in Q2 2019. 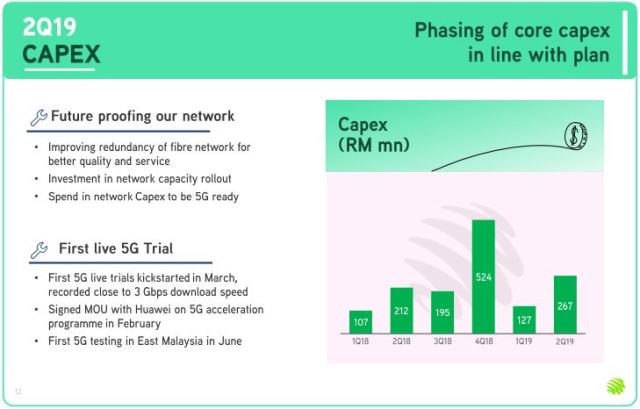 The report said Celcom is the leading mobile operator in terms of 4G availability with score of 86.8 percent.

But Maxis could not improve in the number of both post-paid and pre-paid customers during the quarter.

Maxis has increased its quarterly capital expenditure (Capex) during the second quarter to RM 267 million as compared with RM 127 million in March 2019 and RM 524 million in December 2018 and RM 195 million in September 2018.

Maxis has focussed on adding 5G-ready network capacity as part of the Capex programs for the year. Maxis is aiming to spend RM 1 billion towards Capex during the year. This is part of the strategy to reduce Capex.

Maxis, which has selected China’s Huawei as its 5G equipment supplier, has achieved 3Gbps download speed during 5G trials in East Malaysia in June.

Maxis CEO Gokhan Ogut said: “This quarter saw us making headway in our converged ambitions with the launch of new fibre speeds, delivering smart solutions for enterprises and championing Industry 4.0 initiatives in line with the government’s digital economy agenda. The potential of 5G in a future of smart solutions is tremendous.”

Maxis has launched Malaysia’s first commercial NB-IoT service in key IoT market centres and partnered with MDEC to promote the development of the local IoT ecosystem.