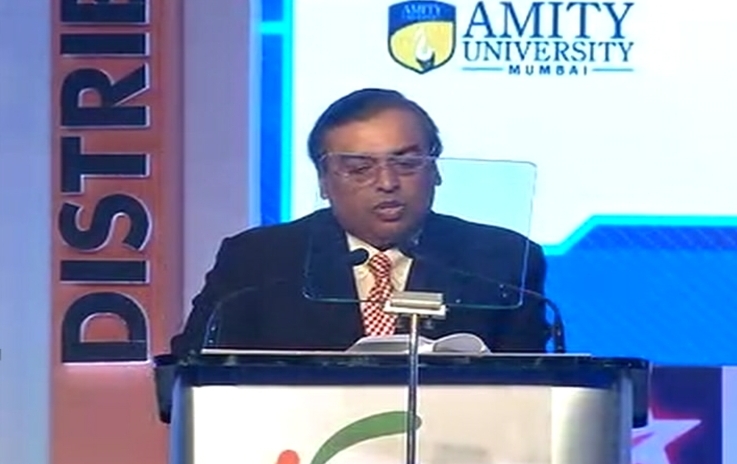 Reliance Industries (RIL) chairman Mukesh Ambani has lined up his wish list for 1.3 billion Indians after the expected launch of 4G services in the second half of 2016.

First, Reliance Jio Infocomm will be the world’s largest start-up.

Second, its 4G services will lift India from a mobile Internet ranking of 150 at present to the top 10 slot.

Third, Jio will transform the lives of 1.3 billion Indians that motivated Reliance Industries to enter and transform the entire digital ecosystem.

Fifth, Jio broadband speed will be 40-80 times faster than its rivals.

Sixth, Jio will increase the data availability in India.

“As the world goes digital, India and Indians cannot afford to be left behind. Today, India is ranked around 150th in mobile Internet rankings out of 230 countries. We have a responsibility. To digitally empower India. To end this digital poverty,” said Reliance Industries chairman Mukesh Ambani on Wednesday at the Ficci-Frames media and entertainment conclave.

Mukesh Ambani’s Reliance Jio Infocomm, which received the BWA license in the year 2011 to launch WiMax services, is yet to launch 4G in India on a commercial basis. The company is still afraid to share a firm date for the 4G launch. Indians have been dreaming that Mukesh Ambani will launch 4G on 28 December, the birth anniversary of his father Dhirubhai Ambani.

Since Mukesh Ambani believes in scale of the broadband project, Reliance Jio will be making a massive investment of around $20 billion. As and when the 4G venture goes live, it will have the largest 4G network coverage in India.

“This ecosystem will comprise devices, broadband network, powerful applications and offerings such as live music, sports, live and catchup TV, movies and events,” he said. “Jio is not just about technical brute force. It is about doing things in a smart, simple and secure way.”

Mukesh Ambani said that five trends are emerging in the digital world: Shift in communications from the oral to visual, transition from linear to exponential, true convergence of telecom, entertainment and media, abundance of choice in every sphere and demonstrated potential transform human lives, IANS reported.

Mukesh Ambani may be clueless about the date for the 4G launch. But rivals – Bharti Airtel, Idea Cellular and Vodafone India are already making inroads into India’s 4G space. Airtel says it has the widest 4G network in India. Vodafone says it is bringing the world’s largest 4G network into India in just 5 states. Idea is ambitious to take on Airtel within the first year of its 4G launch.