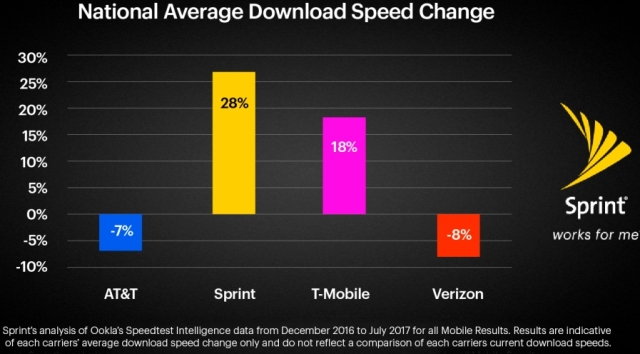 T-Mobile customers are gaining from 18 percent increase in download speed on their networks.

Another recent independent report states that in the past six months Sprint’s 4G LTE availability had improved to nearly rival AT&T, and Sprint’s average speeds had also improved. The report also stated that Verizon and AT&T’s average speeds slowed due to their introduction of unlimited data plans.

“We’ve been offering unlimited data for nearly 10 years and we have a long history managing customer demand which is why our speeds are improving while others have slowed,” said John Saw, Sprint CTO.

“Sprint also has far more spectrum capacity than any other U.S. carrier and our data performance and speeds continue to improve as we deploy more of our 2.5 GHz spectrum,” John Saw said.

Sprint’s newest innovation, Sprint Magic Box, is improving data speeds for its customers such as the City of Kansas City, North Boone School District, and some residents at the Denver Housing Authority where Sprint Magic Box increased download speeds by more than 300 percent in that location.

“The extension of toolbox with new small cell solutions such as Sprint Magic Box, airpoles, strand mounts and other tools, are making a real difference for customers in cities across the country,” said Gunther Ottendorfer, chief operating officer, Technology, at Sprint.

Sprint also continues to expand its portfolio of High Performance User Equipment (HPUE) capable devices. Many of the hottest smartphones are HPUE-enabled including Galaxy S8, LG G6 and HTC U11. HPUE can extend Sprint’s existing 2.5GHz coverage by up to 30 percent bringing faster data speeds to customers in more locations, including indoors.

Sprint is preparing for four-channel carrier aggregation, higher order and Massive MIMO, 256 QAM, and Gigabit Class LTE to add more capacity to the network and make more efficient use of Sprint’s 2.5 GHz spectrum resulting in an improved network experience for all Sprint customers.