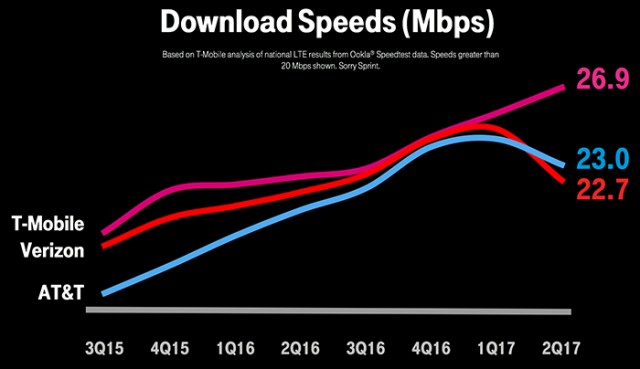 T-Mobile US is the leading US telecom operator in terms of download speeds – ahead of Verizon and AT&T — in the first quarter of 2017, according to Ookla speed test data.

T-Mobile US is also leading in LTE availability ahead of Verizon and AT&T.

Verizon Wireless’ mobile network speed for data consumers has dipped because it was late to introduce advanced wireless technologies such as 4×4 MIMO, 256 QAM, etc to improve customer experience. Verizon dropped to third behind T-Mobile and AT&T in Ookla’s latest quarterly rankings based on millions of wireless tests.

Verizon’s strategy to offer unlimited data may have put pressure on the network speed. Verizon has the least amount of spectrum per customer. 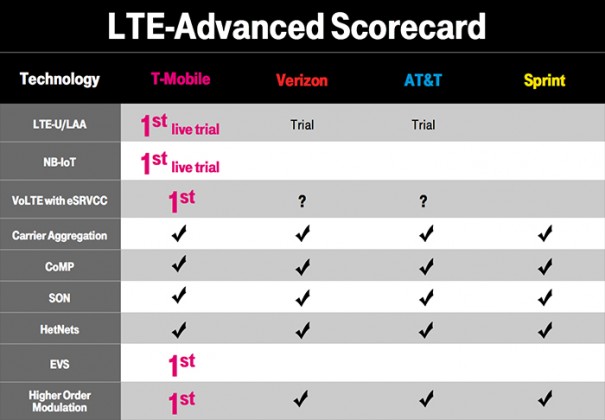 According to internal data, T-Mobile customers use more than 50 percent more data per month than Verizon customers.

The chart shows that Verizon has plunged to third place behind AT&T on network speed.

T-Mobile’s No.1 in LTE Availability beating AT&T and Verizon Wireless, in its analysis of independent third party network performance tests.

T-Mobile has doubled its LTE coverage since 2015. T-Mobile’s network covers 315 million with LTE and the target is to expand LTE coverage to 321 million people.