Telecom Lead Asia: Face off between Sunil Mittal and Mukesh Ambani for 4G / LTE supremacy will move to the streets in 2013 from board rooms currently. 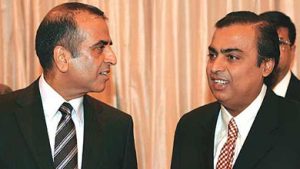 Strategies of Reliance Industries (RIL)’s Infotel Broadband and Bharti Airtel will be different as RIL wants to build a telecom empire from zero user base and infrastructure.

Reliance aims to invest $10 billion in its 4G / LTE networks.

Airtel will be looking at 4G as a value addition to its 3G and 2G offerings. For Airtel, India’s top telecom service provider, 4G will be a premium product for high-end users. Airtel is already enjoying around $20 ARPU from 4G / LTE. If the mobile operator introduces voice services, the uptake will be significantly more.

In fact, voice is a major focus area for both Airtel and RIL.

In 2013, full VoIP will be allowed in India as per National Telecom Policy 2012.

According to Ovum, over-the-top (OTT) VoIP services will not replace traditional telephony, while they will have a marked impact on telecom operators’ revenues over the next eight years. OTT VoIP will cost the global telecoms industry $479 billion in lost cumulative revenues by 2020, which represents 6.9 percent of cumulative total voice revenues.

The US and Asia are leading the voice over LTE market. Verizon Wireless, Metro PCS, SK Telecom and LG U+ are planning to launch VoLTE services this year. South Korea and Hong Kong have already launched LTE data roaming and by August, SK Telecom expects to have the Samsung Galaxy S3, the first handset to support VoLTE on their network.

By 2016 VoLTE will make up about 14 percent of global mobile VoIP revenue, while over-the-top mobile VoIP continues to make up the lion’s share by far, according to Infonetics Research.

Both players will look for launching high quality and cost effective 4G phones in India. RIL, which is talks with Samsung for 4G roll outs, could outsource phones from the Korean major.

Recently, Huawei announed the launch of LTE smartphones in India. The Chinese telecom equipment maker is also planning to unveil 4G tablet in the country next year. RIL is also in talks with Huawei and other 4G smartphone players.

RIL’s content strategy will evolve around its recent investments in TV 18 Group. RIL is also managing its own IPL cricket team. These two areas will enable RIL to offer cost effective content to 4G users. Moreover, RIL invested in education business as well.

Airtel is well behind RIL in these areas.

Analysts are cagey about Airtel’s content strategy. Airtel said its 4G LTE will allow seamless gaming experience on PCs and laptops. Customers opting for 4G can leverage Games On-Demand service on Airtel to enjoy video games like FIFA and NFS from a host of publishers including as EA, Ubisoft, Square-Enix, PopCap and Alawar.

Competition is gearing up to launch 4G.

Videocon Mobile Services is planning to roll out 4G products and services across the newly won circles in 2013.

In the recently concluded 2G Spectrum auction, Videocon Mobile Services bagged liberalized spectrum in six circles of Haryana, Madhya Pradesh-Chhattisgarh, Gujarat UP west, UP east, Bihar and Jharkhand. It has an ongoing mobile operation in Punjab.

Note: TelecomLead.com’s editors have selected this item based on the impact it created on the industry and companies.