Total reported revenues were NOK 27.0 billion which is a decrease of NOK 0.5 billion as a result of the negative currency movements. Service revenues remained stable on an organic basis.

During the quarter, Telenor Group completed the sale of Telenor Myanmar and fixed non-core assets in Sweden. 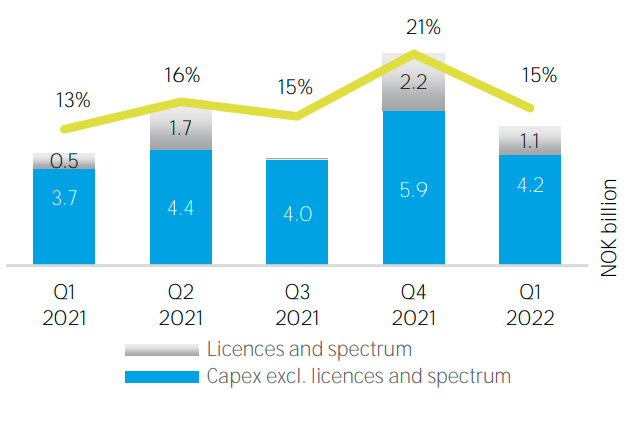 Telenor Capex excluding licenses and spectrum was NOK4.2 billion, which corresponds to a Capex to sales ratio of 15 percent. Telenor said Capex is in line with the plan for the year, driven by the 5G roll-out in the Nordics, fiber investments in Norway and network investments in Thailand.

Licenses and spectrum fees of NOK 1.1 billion include NOK 0.9 billion and NOK 0.2 billion related to 5G licenses in Norway and Denmark, respectively.

Telenor Norway Capex increased by 27 percent to NOK 1,395 million vs NOK 1,096 million mainly due to 5G and the mobile network modernization.

In Norway, the modernization journey continued. 5G roll-out has gained significant pace and more than 43 percent of the population now has 5G coverage. The decommissioning of the copper network is running according to plan, aiming to migrate all Telenor own subscribers to new solutions by the end of 2022.

Denmark NOK 166 million vs NOK 84 million as its network modernization program continued through the quarter to prepare for 5G services and higher transport capacities. Other investments this quarter were related to customer facing areas.

DNA’s Capex was NOK 220 million vs NOK 216 million as the 5G roll-out and network modernization continued at a high pace, bringing the population coverage to 66 percent.

Digi Malaysia Capex in the quarter was mainly related to 4G capacity and coverage expansion, and IT platform modernization. In February Digi was assigned 2x10MHz in the 2600MHz spectrum band for a period of 5 years effective from 1 July 2022.

Grameenphone Bangladesh’s Capex of NOK 403 million vs NOK 364 million was focused on enhancing network quality and coverage, including accelerated 4G roll-out to support data revenues growth. On 31 March 2022, Bangladesh held a spectrum auction and Grameenphone acquired 60MHz in the 2600MHz frequency band at a price of approx. NOK 2.6 billion inclusive of VAT, to be paid in 10 equal annual installments starting from this year.

Telenor Pakistan’s Capex touched NOK 217 million vs NOK 285 million as modernization initiatives are ongoing, including projects which are addressing the energy usage and cost.

Sildenafil Citrate is the active ingredient in Kamagra Australia and is available as an unbranded generic tablet. Sildenafil and Viagra are medically equivalent but Sildenafil is available at a much lower cost.