The latest India Mobile Network Experience report from Opensignal indicates that Vodafone Idea or Vi is the leader in terms of data speed — for both download and upload.

Vi jumps into the lead on download speed on mobile network. Vi is already a leader in terms of upload speed for its phone customers.

Smartphone users connected to Airtel’s network enjoyed the best Experience in India. Airtel continues to place firmly in the Good category (55-65 on a 0-100 scale) with a score of 60.3 points — a growth of 2.8 points since our last report — but Vi is snapping on its heels.

Vi users reported the greatest improvement of six points, from 54.2 points to 60.1 points moving Vi into the Good category. Meanwhile, Jio (53.3) and BSNL (38.6) have continued to place in the Fair and Poor categories, respectively. 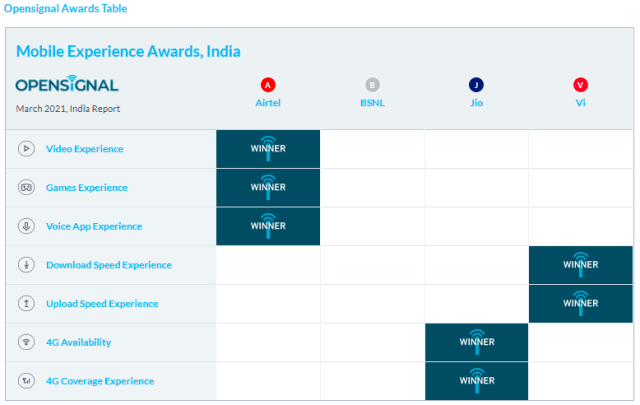 Consumption of short videos online on channels like YouTube, social media, and other OTT apps contributes to more than 50 percent of the mobile data traffic in India, which means that Video Experience is a critical aspect of users’ mobile network experience.

Airtel continues to win in India for multiplayer mobile Games Experience. Airtel’s score of 58.5 points (out of 100) is half a point higher than that of Vi, while Jio and BSNL were further away with 48.1 and 36.9 points, respectively.

Airtel holds on to our Voice App Experience award

Airtel once again leads in our measure of the quality of experience for over-the-top (OTT) voice services — on mobile apps such as WhatsApp, Skype and Facebook Messenger. The operator won our Voice App Experience award with a score of 77.8 points, while Vi was close behind with 76.8 points.

Vi and Airtel users reported upswings of 2.4 points and 2.3 points, respectively, and placed in the Acceptable Category (74-80). Our users on Jio’s network saw a 1.3 points improvement which pushed its rating up from Poor to Acceptable.

BSNL’s score of 69.7 continues to place in the Poor rating category, despite an increase of 3.6 points.

Airtel’s score rose by 1.8 percentage points to 97.4 percent. These increases are noteworthy because both operators have limited room to improve in the proportion of time 4G smartphone users spend connected to 4G as they approach 100 percent so even small increases are impressive.

Vi and BSNL’s scores increased significantly by 5.1 and 3.5 percentage points to 89.2 percent and 61.1 percent, respectively. Jio also wins our 4G Coverage Experience award with a score of 9.4 (on a 10-point scale).