Vodafone India and Idea have improved their mobile Internet speed in the last one year, but their data speed is still below Airtel. 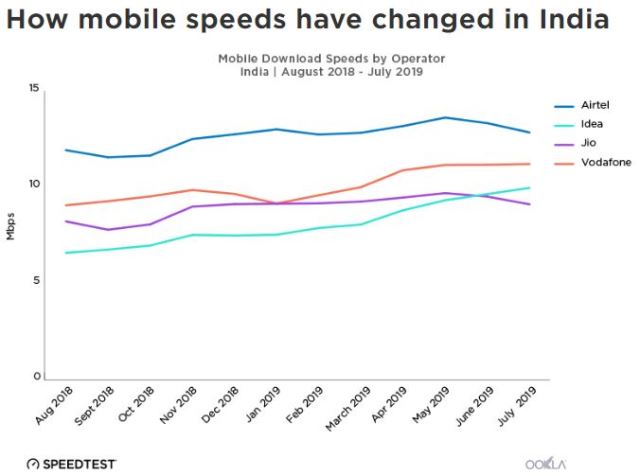 Airtel is the undisputed market leader in terms of mobile Internet download speed in India from August 2018 – July 2019, according to Speedtest Intelligence data released today by Ookla.

The lack of ability of Vodafone and Idea to overtake Airtel in Internet speed across India also reflects the churn of customers. Vodafone Idea lost several million mobile phone customers from its 2G, 3G and 4G networks in June 2019.

But Vodafone Idea network team headed by its CTO Vishal Vohra can showcase that they delivered a better network to subscribers.

Speedtest results show that mobile download speeds in India improved on average for all the top mobile operators over the period of August 2018 – July 2019, with Airtel holding onto the title of fastest operator throughout these 12 months.

After May 2019, mobile download speeds for Airtel and Jio started a decline that continued through July 2019. Vodafone saw a decline in mean mobile speed from November 2018 through January 2019. But Vodafone recovered to significantly increase download speed to effect a year-over-year improvement of 23.6 percent.

Mobile download speeds on Idea improved in every month except December 2018, for a year-over-year improvement of 51.2 percent.

Airtel had the highest the Acceptable Speed Ratio (ASR), which shows how consistently they provide speeds at or above 5 Mbps, in every single month, with an ASR for the year of 70.4 percent.

Despite a dip in January, Vodafone had the second highest ASR throughout the year with an average ASR of 60.3 percent.