Bharti Airtel, India’s first telecom operator and the only one to go live with 4G / LTE network, can learn a lot from Korea’s SK Telecom, the first to unveil the LTE-Advanced network in the world.

SK Telecom, an Asian telecom operator with presence in Korea, is well ahead of Airtel in terms of its 4G offerings.

While releasing Samsung’s Galaxy S4 LTE-A smartphone, SK Telecom on Tuesday said it will embed services like Safe Message and Safe Data Backup as basic features in all its LTE-A phones.

Safe Message is designed to protect mobile phone users from smishing (SMS phishing) attacks by enabling them to check whether the message is sent from a trusted source. 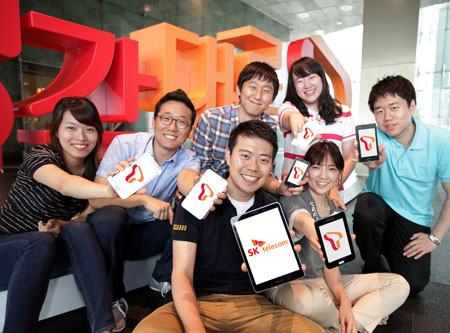 Safe Data Backup enables mobile users to upload personal data stored in their smartphones to the cloud server to keep data safe from smartphone loss and accidental deletion. The company plans to mount these features on all its to-be released LTE phones as well.

SK Telecom will expand its LTE-A phone lineup to boost the popularization of LTE-A service. It plans to provide 7 different LTE-A smartphones in the second half of 2013.

The billionaire Sunil Mittal promoted Bharti Airtel has introduced just one smartphone — in association with Huawei — till today. Its 4G strategies are focused on dongles at present.

On June 27, 2013, the company will launch a group video calling service for up to four users. The service, an upgraded version of the 3G network-based multi-party video conferencing service, will support 12 times better video quality and 2 times clearer audio quality.

SK Telecom’s Btv mobile, an IPTV service with 550,000 paid subscribers, will begin providing full HD (1080p resolution) video streaming service, for the first time in the world, from early July. Full HD video streaming requires a speed of 2Mbps or above, which is well supported by the LTE-A network.

The company will also launch T Baseball Multiview to enable users to watch two different games on one screen in July 2013. T Baseball is a free, real-time professional baseball game broadcast service optimized to the LTE network. Launched in August 2012, the service is currently enjoyed by 1.1 million users.

The company is also planning to launch a new HD video-based shopping service in August 2013 to make shopping more fun and convenient for customers. Users will be able to watch 6 different home shopping channels on one screen.

The difference between the ARPU of Korean and Indian mobile operators is the critical component for offering innovative 4G services. Airtel lacks confidence at present. It needs to become more aggressive in 4G planning. A rate cut may not be enough to succeed in 4G in India.