192 mobile operators in 81 countries are investing in 5G network as compared with 154 operators in 66 countries in July 2018, according to the latest GSA report released in November 2018. 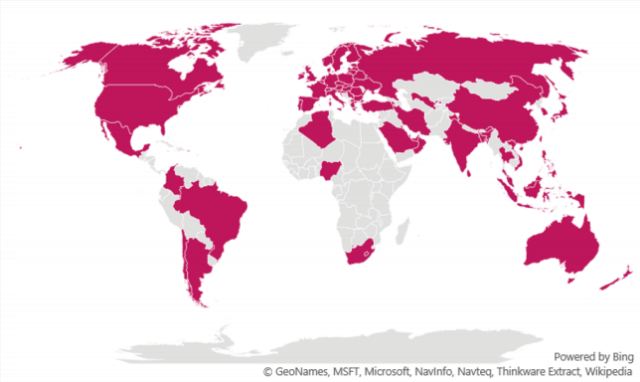 This list includes 5G operators who have demonstrated, are testing or trialling, or have got to conduct field trials of 5G technologies, are deploying 5G networks or have announced service launches.

These operators have announced over 524 separate 5G demonstrations, tests or trials.

GSA also said 80 telecom operators in 46 countries have announced their plan to launch 5G to their customers between 2018 and 2022. 37 networks will launch 5G services in 2020 alone.

The largest 5G network is owned by Verizon in the US Verizon launched its FWA network in various cities. Verizon’s network is not yet 3GPP compliant. It uses Verizon’s own 5G specification, but will be upgraded to be 3GPP compliant in the future.

Elisa in Finland and Estonia (mobile and FWA), Etisalat in the UAE (FWA), TIM and Fastweb in Italy and Vodacom Lesotho (FWA) are the other 5G deployments.

The United States, China, South Korea and Japan are the forerunners in the 5G race. But US-based mobile operators will deploy 5G before their Chinese counterparts, according to a ABI Research report on 5G.

“This will make China the biggest mobile broadband market and the Chinese government aims to position 5G as a key technology in its industrial revolution strategy,” said Emanuel Kolta, research analyst at ABI Research.

China Mobile, China Unicom, and China Telecom will all start large-scale deployments in 2020, prior to 2019’s pre-commercial deployments.

The China government has positioned 5G as a core component of its 13th Five-Year Plan and Made in China 2025 strategic plan to upgrade the Chinese industry.

Another ABI Research report said 5G network slicing will create $66 billion in value for enterprise verticals including manufacturing, logistics, and transportation by 2026.

“Our projections point to a healthy growth outlook but except for Telefonica, BT, and Deutsche Telekom, there is not much market activity of substance,” Don Alusha, senior analyst at ABI Research, said.

GSA said the 5G device ecosystem is growing as the first commercial 5G services for FWA applications are switched on.

5G enabled devices are expected to reach 1 billion six years after the first commercial launches, according to ABI Research.

802.11ax or Wi-Fi 6 chipsets will cross 1 billion in annual shipments by 2022 three years after the first commercial deployments expected for 2019. Technology adoption of Wi-Fi 6 will be driven predominantly by the smartphone market as it transitions away from 802.11ac beginning in 2019.