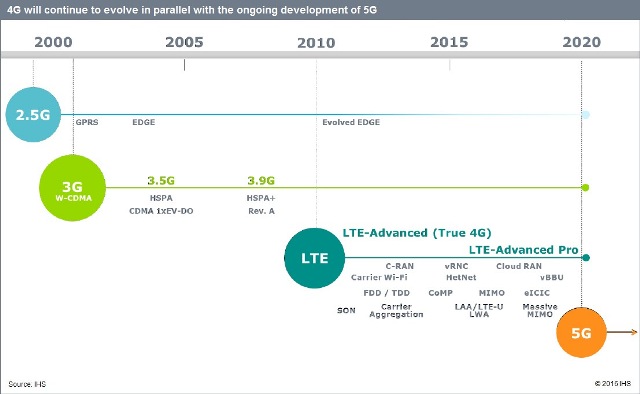 With 5G standards expected to be released by the FCC in 2020, it will be available in two waves, namely, the sub-6GHz in 2017, followed by the actual 5G at higher spectrum bands termed as millimeter wave (mmWave), in 2020, as per 5G Development Market Report by IHS Markit.

The sub-6GHz spectrum, currently in use by existing mobile and wireless communications, are the ones that will carry 5G first, in its early stages.

At present, a precise definition for 5G is not possible with vendors, mobile operators, 5GPPP, the ITU etc. putting out their own ideas on the matter.

5G will either be an extended LTE and LTE-Advanced network system with backward compatibility with all 3GPP technologies, or a new network architecture with a new air interface and radio access technology (RAT), varying from current cellular designs.

There are expectations that 5G will move beyond cellular, shaping up as a multilink architecture that enables direct device-to-device communications.

With 4G being deployed and in demand at present, it is believed to continue to evolve in sync with the on-going development of 5G.

The technology, with commercial launches expected between 2017 and 2020, saw the initial discussions about 5G started in 2012, and in 2013 NTT Docomo announced that it will roll out 5G at the Tokyo Olympics in 2020.

South Korea also set the target for pre-commercial 5G commercially, which will be similar to a 4.5G for the PyeongChang Winter Olympics in 2018.

Also, Verizon revealed plans to begin commercial deployments of 5G in 2017, at the CTIA 2015.

The technology, which is to be 50 times faster in comparison to its predecessor, will offer speeds ranging up to 10 gigabits per second with an ultralow latency of around one millisecond.

5G is believed to shape into the backbone of smart cities, IoT, driverless cars, health care and increasing data demand.

With industry use cases becoming the key to driving 5G and related innovation, Internet of Things (IoT) will be the top use case for 5G, added IHS Markit based on the 5G Strategies Global Service Provider Survey.

Currently, carriers will be able to use 4.5G, 4.5G Pro, 4.9G and similar networks offering to test out a range of new applications that require more bandwidth, lower latency and improved machine-to-machine communications.

With 5G development happening with limelight on new air interface transmission schemes, higher frequency bands and advanced antenna technologies such as Massive MIMO and beamforming, the 5G networks will generate nearly $250 billion in annual service revenue by 2025, as per another report by ResearchMoz.

Ovum has predicted that after commercial deployment of 5G in 2020, there will only be 24 million 5G customers in the world by 2021, which is low when compared to that of 4G.

Strategy Analytics revealed in their forecast that the number of worldwide 5G connections will touch the 690 million by 2025.

And, including regional, national government, wireless carrier and vendor initiatives, 5G R&D and trial investments will account for nearly $5 billion by 2020, following a CAGR of nearly 40 percent over the next 5 years, as per the 5G Wireless Ecosystem Market report.

At the same time, the 5G market is expected to increase from 35.0 million by 2021 to 89.0 million by 2022, as per the 5G Technology Market report with early adopters of 5G technology being U.S., Japan, South Korea, and China.