The latest Opensignal report has revealed the comparison of 5G speed vs 4G speed vs WiFi speed in several countries. 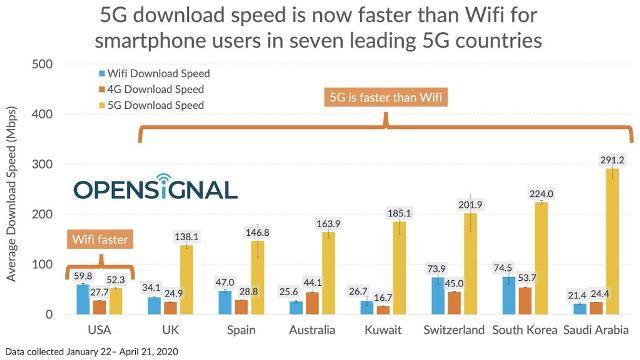 5G offers faster average download speeds than WiFi in seven out of eight leading 5G countries. But 4G is faster than WiFi in only two of these countries, Australia and Saudi Arabia.

The U.S. is the exception, where WiFi continues to offer a small edge over 5G because of the large number of U.S. 5G users connecting on widely available, but relatively slow, 5G networks that are deployed using low spectrum bands.

In most countries, initial 5G services have been offered exclusively on fast and high capacity mid-band spectrum — around 3.5Ghz, sometimes called the C-band. T-Mobile and AT&T have launched their main 5G service on low-band spectrum which has less capacity, but is better suited to offering wide coverage. 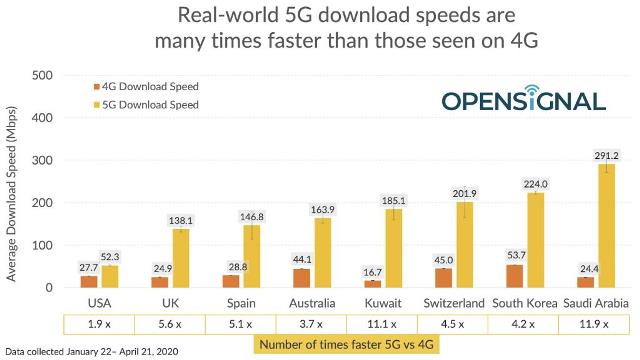 In the U.S. as elsewhere, carriers will increasingly offer 5G on higher mid-band frequency bands and as they do, average U.S. 5G speeds will rise significantly.

The difference in 5G download speed between each country is because of the different amount of spectrum used to deploy the 5G service.

Where operators have used near 100MHz of spectrum they’ve typically offered users speeds faster than those operators limited to 40MHz or 50MHz 5G channel sizes. The quality of the backhaul connections to each 5G base station — the way each cell tower is connected onto the main network — also affect the real-world experience.