Telecoms regulator in Bulgaria said it would seek ways to speed up the rollout of 5G networks after operator Vivacom contested in court its decision to allocate three 5G licences.

The Communication Regulation Commission (CRC) decided to close a 5G auction and grant each of the country’s three major telecoms operators a licence in the 3.6 GHz spectrum without competition after reviewing their applications for the process.

Bulgaria’s leading telecoms firm Vivacom, controlled by United Group, has started legal proceedings over the way the licences were assigned, a court filing showed, a process that could take months or years and delay development of the country’s 5G networks.

“We will hold a meeting and seek ways to move forward because it is in the national interest to speed up the process, if it is possible. If not, it will be left in the hands of the court,” CRC head Ivan Dimitrov told Reuters.

Even if the regulator issues the licences as assigned at present, they cannot be enforced before the court rules on Vivacom’s complaint, but one way out could be a new auction provided all three telecoms firms agree, Dimitrov said.

Vivacom said in a statement the best way to allocate 5G frequencies is through an auction, especially when there is a competitive interest for a specific band of the spectrum.

A1, part of Austria’s A1 Group controlled by Mexico’s America Movil, and Telenor Bulgaria, owned by Czech investment group PPF, said they were satisfied with the frequencies’ bands allocated to them.

“We will consider accepting any change to the regulator’s decision if it is the only transparent and stable way to acquire 5G spectrum,” Telenor Bulgaria said in an email.

A1 also said it may consider other options and was surprised by Vivacom’s appeal.

“This is a dangerous approach, which could have very grave consequences for 5G development and economic recovery in Bulgaria,” A1 said.

The CRC initially planned to auction three 20-year licences each for 100 MHz with an initial price of 4 million levs ($2.44 million), but reviewed its decision on March 10 after examining the applications. 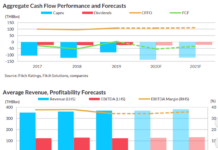 Forecast on revenue and 5G network Capex for Thailand telecoms