China, the United States, Japan and Korea will account for more than half of the world’s subscribers to 5G mobile networks by 2025, leaving Europe lagging, a GSMA study showed on Thursday. 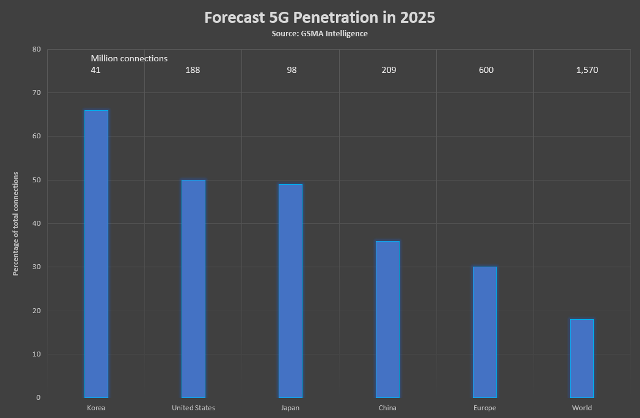 Europe, moving more slowly to build 5G networks, will lag in terms of consumer take-up. Yet the picture looks different in business, where 5G will be able to run smart factories using connected robots, devices and sensors, Reuters reported.

“It’s going to be a small cluster of countries that leads adoption in 5G, with the rest of the world following,” Tim Hatt, head of research at GSMA Intelligence, said. “China, Japan, Korea and the U.S. – between those, you’re looking at well over half of worldwide 5G subscribers by 2025.”

In Korea, 66 percent of mobile connections will be 5G by mid-decade, GSMA Intelligence forecast in a 100-page study, followed by the United States on 50 percent and Japan on 49 percent.

China will dominate with 600 million 5G connections. Worldwide, 1.57 billion people are expected to adopt 5G by 2025 – or 18 percent of total mobile users.

Early experience shows that carriers can hike 5G prices by 15 percent-20 percent, offering ‘more for more’ unlimited data plans. But, if the past is anything to go by, those gains will eventually be competed away.

IoT market, according to GSMA Intelligence forecast, will be worth $1 trillion in 2025, roughly equal to total mobile industry revenue last year. Yet of that, only 5 percent will come from connectivity.

GSMA Intelligence forecasts that 59 percent of total worldwide mobile connections will be 4G in 2025. A combination of Android smartphones and affordable data offers growth potential in emerging markets like Nigeria, Mexico, India or Indonesia.