The latest Ericsson Mobility Report June 2019 indicates that 5G in India will take at least three years to take off, while 4G will become dominant in the next five years. 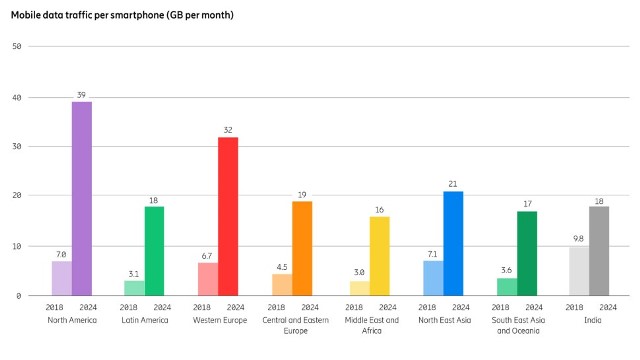 This indicates that telecom operators such as Airtel, BSNL, Vodafone Idea and Reliance Jio will take a go-slow approach in the case of 5G. India government is currently preparing to start 5G spectrum auction.

The report said India’s mobile market fell by 14 million in 2018 — due to the introduction of a minimum regular recharge amount by some large operators, to tackle low-paying users and increase average revenue per user (ARPU).

GSM/EDGE-only remained the dominant technology during 2018, accounting for 47 percent of mobile subscriptions, in India region.

Globally, mobile data traffic grew 82 percent in the first quarter of 2019 — mainly driven by the increased number of smartphone subscriptions in India and increased data traffic per smartphone per month in China.

In North East Asia, traffic per smartphone also grew strongly during 2018, and the region has the second-highest monthly usage, averaging 7.1GB. Attractive data plans, as well as innovative mobile apps and content, have pushed up monthly mobile data usage, particularly in China.