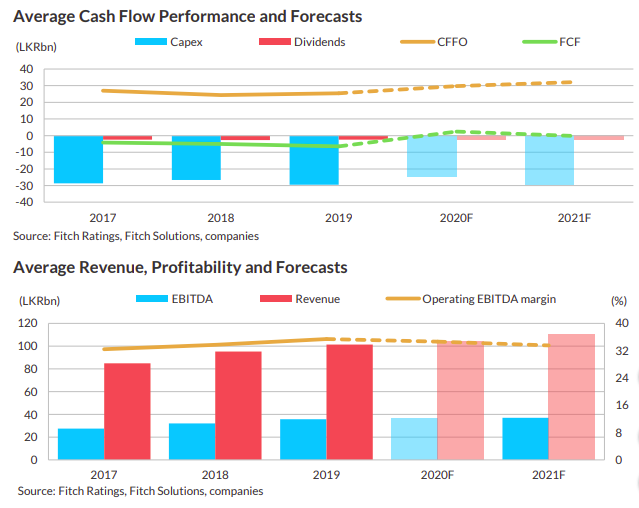 Leverage for the two companies will diverge, as Dialog will improve its net leverage and to generate a positive FCF margin of 5 percent-6 percent. SLT’s net leverage is likely to deteriorate by 0.1x-0.3x annually due to negative FCF.

SLT’s CFFO will be insufficient to fund its large capex requirements and dividend commitments. Average Capex / revenue ratio will increase to 26 percent-27 percent (2020F: 23 percent-25 percent) as telcos return to normal Capex levels to expand 4G network coverage and fibre connectivity, following lower capex in 2020 due to the pandemic.

SLT and Dialog’s home-broadband segments will expand by a high-teen percentage from a small base and for SLT’s lead over Dialog on fibre coverage to persist.

The 2021 industry revenue is forecast to rise by 5 percent-7 percent, driven by a surge in data and fixed broadband, following lower growth of around 2 percent-3 percent in 2020.

Bundled ARPU should rebound to pre-pandemic levels, following a drop of 6 percent-8 percent in 1H20. We forecast stable average operating EBITDA margins of around 34 percent-35 percent (2020F: 35 percent) on better economies of scale in the data and home-broadband segments. This should offset the negative effect of a changing revenue mix.

There will be further consolidation and Bharti Airtel Lanka may seek M&A due to mobile competition and higher taxes amid elevated capex requirements.

Airtel Lanka acquired the 900MHz spectrum, which was surrendered when Etisalat Lanka and Hutch Lanka merged in 2018. Telcos in Sri Lanka will focus on profitability rather than price-based competition.