The 5G spectrum auction is expected to assist the Italian government to mobilize at least 2.5 billion euros or $2.9 billion from the sale of frequency to telecom operators, AGCOM said in a statement.

Telecom Italia (TIM) has launched 5G in San Marino taking Europe to the top of the wireless space. TIM is the first telecom operator in Europe to create a live 5G network for commercial purposes with Nokia and Qualcomm.

Ofcom, the telecom regulator in the U.K., has already conducted spectrum auction for selling both 4G and 5G frequencies earlier this year. 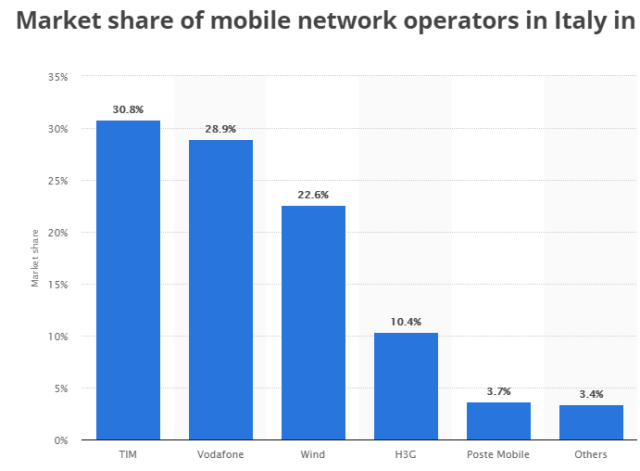 The above chart prepared by Statista shows the wireless market share of main operators in Italy in 2016.

AGCOM said the 5G spectrum rules represent the first step for the roll-out of 5G services, which promises to deliver ultra-fast internet connections to Italian homes and businesses.

Italy, which ranks 25 out of 28 in this year’s Digital economy and society index (Desi) of EU member states, is the first country in Europe to set the rules for assigning frequencies in a 5G auction.

In Germany final auction conditions will be made available by the end of the year and the auction itself is expected to be held early 2019.

Under a 2016 plan, the European Union wants to deploy 5G for all urban areas and major terrestrial roads by 2025.

AGCOM said the rules would help the development of a series of new players including pure infrastructure operators.

5G services need fiber optics to work properly since copper networks would not be fast enough to support the next generation mobile phone technology.