Reliance Jio is betting big on the 700 MHz spectrum that it acquired for INR 392.7 billion during the spectrum auction for spearheading its standalone 5G network roll out in India. 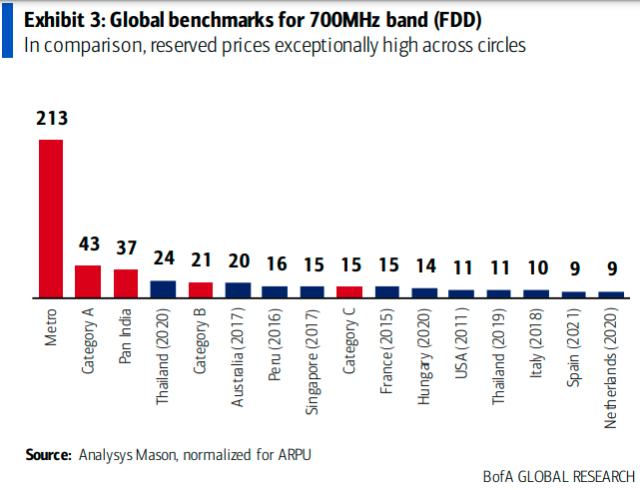 Jio was the only telecom operator to buy the costly 700 MHz. There were no takers for 700 MHz in the previous auctions in 2016 and 2021 in India. The 220 MHz spectrum in the 700 MHz band looks costly for Indian telecoms, but it gives Jio a massive first-mover advantage in SA 5G rollout, which could help it poach high-end customers from rivals, says BofA Security India in a client note.

“Looking at telecom operators’ deployment strategies, we can see that low-frequency bands (for example, 700 MHz) are used for national coverage, whereas sub-6 GHz bands are utilized for city coverage, and mmWave is used for megacity hotspots,” IDTechEx said in a 2021 note.

Reliance Jio utilized 40 percent reduction in the reserve price (vs the 2021 auction) of the 700MHz band and purchased 2x10MHz pan-India spectrum, or ~40 percent of overall quantum. The 700 MHz band could give Jio an edge in terms of network quality, especially indoors, and this could increase investors’ concerns on further spectrum outgo for Airtel if Jio was able to offer significant differentiation in 5G network quality on 700 MHz band.

Jio has the highest share of spectrum at ~47 percent, followed by Airtel at ~39 percent. Analysts think that Jio will roll out an NSA network before year-end and a SA network within one year post NSA rollout. Jio will experiment with disaggregated software and hardware for SA rollout.

The acquisition of 700 MHz will enable Jio to roll out standalone (SA) 5G. The advantage of SA 5G is that the company would be able to offer the true low-latency applications, such as slicing. This is difficult for its rivals to offer given the lack of spectrum (telcos cannot roll this out on 4G bands).

Airtel would be under pressure to have a similar network in coming years. This raises the risk of Airtel acquiring 700 MHz in the next auction. Even Capex investments for Airtel should be higher – first to roll out NSA and then SA 5G. 5G-related investments are likely to remain high for a couple of years in the case of Airtel, BofA Securities India said.

2) indoor coverage is unlikely to be achieved by mmWave, and telcos would need sub-GHz

4) running a 5G network on mmWave without sub-GHz would be costly, as it would need more towers. 700 MHz would lead to potential savings vs running only mmWave

5G rollouts would be granular, starting with metros and larger cities given the facts that ~7 percent of the overall smartphone base is 5G enabled use cases are just evolving, Nomura said in its client note after the 5G spectrum auction.

Historically, Indian telcos have refrained from charging a premium for 4G plans (vs 2G/3G data plans). There is a potential for telcos to charge a premium for 5G vs 4G as they can offer higher speed to premium customers, who may purchase smartphones above INR15000. 5G tariff plans would be a key monitorable in the near term, and 5G premium vs 4G may provide the next leg of ARPU uptick for the telcos, Nomura said.