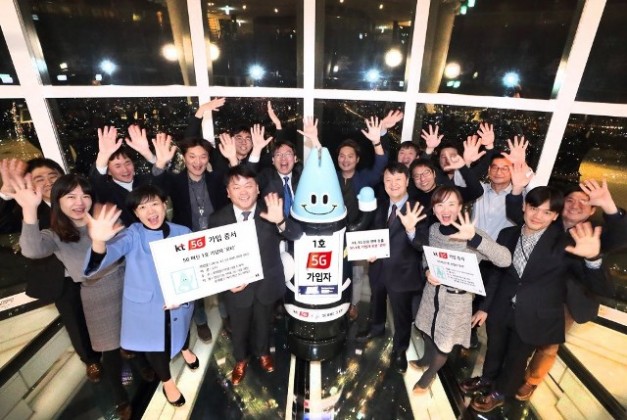 The Lota robot will guide visitors through the Seoul Sky Observatory, which sits on top of the 123-storey, 555-meter-high Lotte World Tower in eastern Seoul. The company plans to expand into new businesses with more pilot clients, using intelligent machines and business-to-business (B2B) operators.

KT’s 5G network is offering 10 gigabytes of data for a mobile hotspot terminal for 49,500 won per month, the same rate applied to Lota. A smartphone with a mobile hotspot function provides an Internet connection for other mobile devices, such as notebook computers.

KT Chairman Hwang Chang-Gyu, Oh Sung-Mok, head of the Network Group and Lee Pil-Jae, who heads the Marketing Group, kicked off 5G wireless service at its network control center in Gwacheon, south of Seoul – on at midnight on December 1.

KT deployed the first phase of its 5G network in late November. The new service has begun in the greater Seoul metropolitan area, in the country’s most populated, major metropolitan cities outside Seoul and in isolated areas including Jeju, Ulleung and Dok islands.

Because of KT’s Internet backbone with full mesh topology and edge communication centers based on control and user plane separation (CUPS) technology, its 5G service with ultra-low latency is uniquely advantaged over other carriers.

Samsung, Hyundai Mobis, Posco, Intel, Ericsson, Nvidia and Qualcomm are some of the 5G technology suppliers.