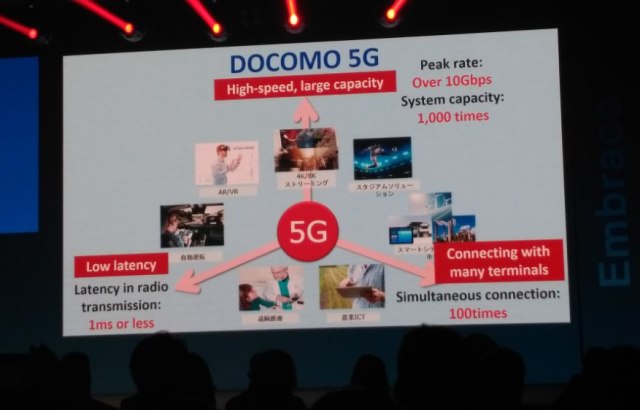 A stationary mobile terminal received signals at distances of 0.8 to 1 km from the base station during the 5G trial.

During the 5G trial, DOCOMO achieved an over-the-air latency of less than one millisecond together with a packet transmission success rate of more than 99.999 percent.

DOCOMO has also achieved ultra-reliable low-latency communications at distances of approximately 0.3 km to 0.6 km from the base station, when the mobile terminal was moving at approximately 25 km/h.

Meanwhile, NTT DOCOMO, in a trial conducted with MediaTek, has developed a chipset to increase the spectral efficiency of mobile devices by up to 2.3 times compared to existing LTE technology.

NOMA multiplexes signals at a base-station transmitter to leverage the increased signal processing capacity of user devices and cancel interference among multiplexed user signals. MUIC removes interference from other users when a base station transmits a signal to a number of users simultaneously.

During the trial, three smartphone-sized devices embedded with chipsets, each placed in a different location, received data that was transmitted simultaneously from a base station using the same frequency, while the transmission power of the signal transmitted to each device was adjusted.

Using the developed chipset, each device successfully eliminated interfering signals intended for the other devices and received only the intended data, resulting in up to 2.3 times greater spectral efficiency than that of single-user Multi Input Multi Output (MIMO).