Orange, which launched 5G in Romania during the fourth quarter of 2019, seems to have gone slow on its 5G deployment strategy. 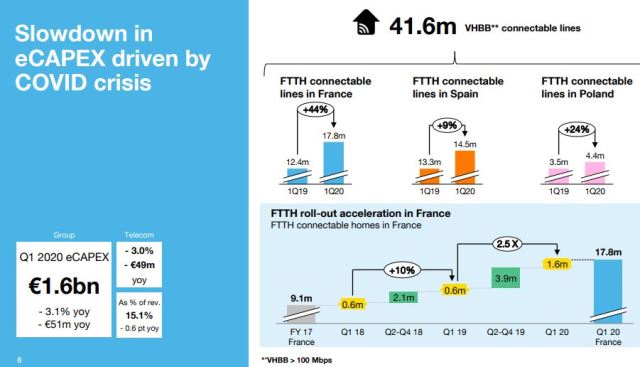 Considering that Orange has only 70 million 4G customers, Orange is yet to spell out its 5G network strategy.

Orange CEO Stephane Richard during analyst call said the mobile operator will review its plans to launch 5G in some of its European operations.

Orange may postpone the commercial launch of 5G service in France and Poland because of delays in spectrum auctions.

Most of operators and B2C or B2B customers have observed that existing 4G networks associated with FTTH fully satisfy the customer needs.

Orange said its Capex fell 3.1 percent in the first quarter of 2020 to €1.6 billion due to delays in fixed and mobile network investments due to the impact of Covid-19.

Orange, as part of the fixed and mobile broadband deployment strategy, has connected 41.6 million households to high-speed fixed broadband, achieving growth of 43.7 percent in France, 6.6 percent in Spain and 24 percent in Poland.

Orange, as part of mobile network deployment strategy, achieved more than 98 percent 4G coverage in France, Belgium, Poland, Luxembourg, Romania and Moldova. Coverage of 4G network reached at least 96 percent in its other European countries and included 15 countries in Africa and the Middle East.

Orange Money remains a major growth driver for Orange’s operations in Africa and Middle East, and the service continued to be extended with the launch of the service in Morocco in March.

Stephane Richard, chairman and CEO of Orange Group, said: “This growth has been due to strong performances in our Africa & Middle East business, progress in the Enterprise market, in France and in Europe.”