Singtel Group has revealed investment by operating companies in 5G network has started paying off well. 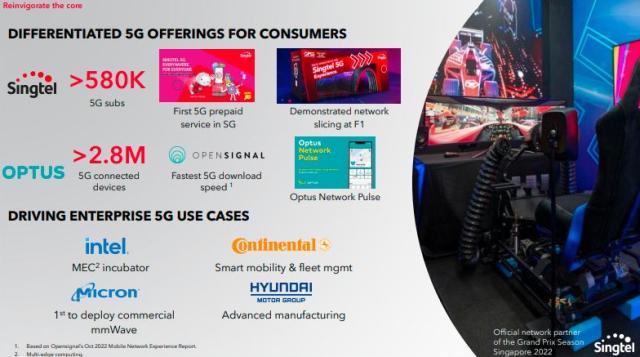 Singtel Group’s capital expenditure will be around S$2.6 billion, comprising A$1.7 billion for Optus and S$0.9 billion for the rest of the Group in 2022. The guidance on Capex reflects the Singtel Group’s multi-year growth investments in 5G networks, data centers and satellites, as well as digital transformation initiatives to enhance customer experience and efficiency.

Optus has strengthened its focus on 5G leadership and won the OpenSignal 5G Download Speed award and 5G Video Experience award. Optus, in collaboration with Ericsson, deployed Australia’s most energy efficient RAN site at Optus’ Moorebank site in Sydney. Optus’ 5G capable devices supported on the network grew 26 percent in the first half and almost doubled from a year ago.

In July 2022, Singtel surpassed 95 percent standalone 5G coverage. This was more than three years ahead of the regulatory target of end-2025.

Spectators at Singapore’s National Day got their first taste of 5G when streaming video live.

At the Grand Prix Season Singapore 2022, Singtel took the 5G experience to the next level as the event’s official network partner.

With Sports Plus on Singtel CAST, race fans were able to catch the entire high-velocity night race from wherever they were, even around the high traffic areas of the circuit, due to the dedicated capacity allocated to the video streaming service.

Singtel deployed the country’s greenest radio cell, the Ericsson AIR 3268, which is expected to save more energy as more of such radio cells are deployed to augment its nationwide 5G coverage.

Singtel’s first half net profit rose 23 percent to S$1.17 billion, boosted by an exceptional gain from the Group’s partial divestment of its stake in Airtel. Operating revenue fell 5 percent to S$7.26 billion due to adverse currency effects and the absence of revenue from NBN migration and Amobee.