T-Mobile announced it has nearly doubled the number of 5G cities and towns by focusing on mid-band 5G. 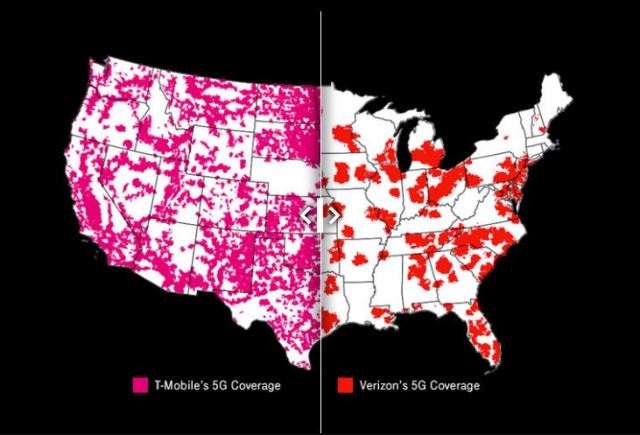 The second largest telecom operator said mid-band 2.5 GHz 5G delivers both broad coverage and fast speeds at the same time — and it can even go through walls. Telecom experts believe that millimeter wave cannot go through walls and ensure adequate 5G experience.

T-Mobile mid-band 5G reaches nearly 410 cities and towns. The Un-carrier plans to cover 100 million people by the end of the year.

T-Mobile has more mid-band spectrum than AT&T and Verizon. The map shows T-Mobile 5G network coverage is better than Verizon.

“We’re the only ones building a transformational 5G network built on dedicated — not shared — airwaves. That means only T-Mobile is capable of making the world’s best 5G network a reality,” Neville Ray, president of Technology at T-Mobile, said.

“Sure, mmWave can be fast, but it’s nearly impossible to find, while low-band 5G is easy to find, but offers smaller improvement over existing LTE. With the 2.5 GHz spectrum being lit up by T-Mobile, you get the sweet spot of noticeably improved performance in a respectable coverage area,” Bob O’Donnell, president of TECHnalysis Research, said.

T-Mobile has America’s largest 5G network and it’s only getting better as the Un-carrier deploys more mid-band spectrum from Sprint. T-Mobile’s 5G network covers more than 7,500 cities and towns across nearly 1.4 million square miles of the U.S.

T-Mobile has pioneered a layer cake strategy to deliver a nationwide 5G network for all: dedicated spectrum across all three layers of 5G — low for far and wide coverage indoors and outside, mid for broad coverage and blazing fast speeds and high for super-fast speeds over shorter distances — for the best 5G experience.

T-Mobile is the only one building 5G with dedicated spectrum across all three bands, which is important since 5G phones will use a lot of capacity. T-Mobile has wide open freeways ready to take on massive amounts of 5G traffic, while Verizon and AT&T have to steal LTE spectrum from their existing customers to broaden their 5G coverage.

Using Dynamic Spectrum Sharing (DSS), Verizon forces 5G and LTE customers to share bandwidth, splitting up the capacity so each technology only gets part of it, taking capacity away from their current smartphone customers and increasing congestion.

T-Mobile’s engineers are lighting up 1,000 sites per month with 2.5 GHz 5G and T-Mobile has plans to cover 100 million people with mid-band 5G by the end of the year.