Verizon, which reported 1.6 percent drop in the first quarter revenue, said it will not slash its capital expenditure of $17.5 billion to $18.5 billion this year focusing on the expansion of 5G network. 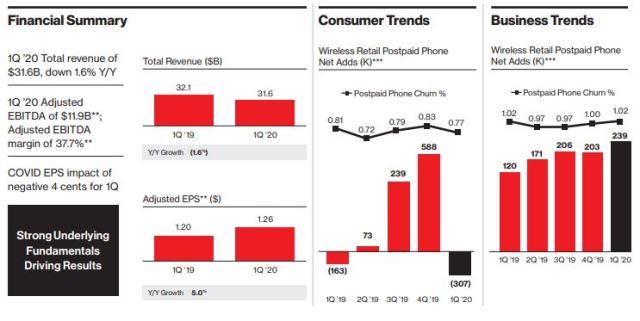 Verizon’s capital expenditures (Capex) during the first-quarter were $5.3 billion in order to support the capacity for unprecedented traffic growth across Verizon’s networks and the deployment of fiber and additional cell sites to support the company’s 5G Ultra Wideband rollout.

AT&T’s Capex during the first quarter was $5 billion focusing on the fibre and 5G network expansion.

Both Verizon and AT&T did not reveal details about their growth from 5G business. AT&T and Verizon started launching 5G in April 2019.

Verizon Communications lost 68,000 mobile phone subscribers who pay a monthly bill in the first quarter, as people stayed indoors due to lockdowns to halt the spread of the coronavirus in the United States.

AT&T added 163,000 new phone subscribers. AT&T was able to earn more customers despite shutting down more than 40 percent of its retail stores.

Verizon closed nearly 70 percent of its company-operated retail locations and reduced in-store service hours to promote social distancing. This resulted in a significant drop in customer activity and device volumes for the quarter, Verizon said.

Verizon’s operating revenues in first-quarter 2020 were $31.6 billion, down 1.6 percent from first-quarter 2019. This decline was primarily the result of growth in wireless service revenue in the Consumer and Business segments.