Vodafone Group said its revenue increased by 4 percent to €45.6 billion in fiscal 2022 — mainly driven by service revenue growth in Europe and Africa. 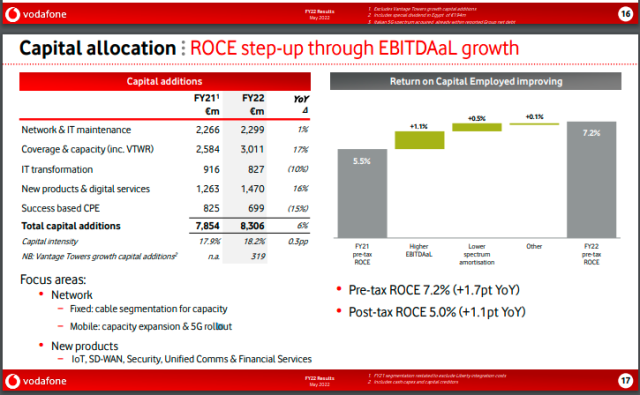 Vodafone achieved adjusted EBITDAaL growth of 5 percent to €15.2 billion and margin expansion of 0.5* percentage points to 33.4 percent in fiscal 2022.

Vodafone said ongoing delivery of efficiency program resulted into to a net €1.5 billion of savings during FY19-22.

Operating profit increased by 11.1 percent to €5.7 billion, reflecting the growth in Adjusted EBITDAaL and reduction in depreciation and amortisation on owned assets

Vodafone said its 5G network is available in 294 cities across Europe in fiscal 2022 as compared with 240 cities in fiscal 2021.

“We delivered a good financial performance in the year with growth in revenues, profits and cash flows, in line with our medium-term financial ambitions. Our organic growth underpinned a step-change in our return on capital, which improved by 170bps to 7.2%,” Vodafone Group CEO Nick Read said.

“Whilst we are not immune to the macroeconomic challenges in Europe and Africa, we are positioned well to manage them and we expect to deliver a resilient financial performance in the year ahead,” Nick Read said.