82 percent of Indian respondents admit to the Fear of Missing Out (FOMO) when not connected.

Incidentally, the Tata Communications survey did not focus on concerns related to Internet speed, availability, pricing, demand and supply, etc.

21 percent Indian women feel anxious or lost when not connected to the Internet against men (16 percent).

Indian respondents understand that a lot of information resides in the cloud with 69 percent aware that the cloud resides in data centers. 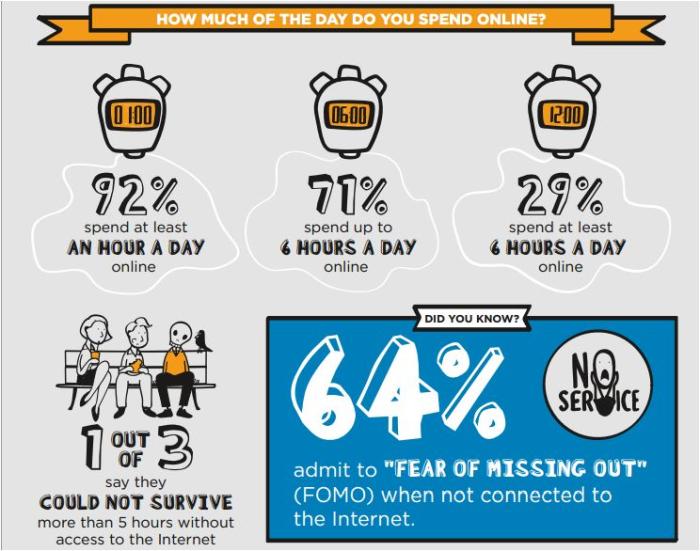 Tablets and smartphones are rapidly replacing television as the preferred screen as nearly twice as many surveyed Indians (43 percent) are willing to give up television for the Internet, compared to Americans (17 percent) and Europeans (22 percent) respondents.

Internet’s ability to connect people with incredible speed is cited by more than three quarters of the Indian respondents as its principle benefit to society, as opposed to providing a democratic platform for expression (10 percent), enabling e-commerce (4 percent), making shopping easier (3 percent) or a social equaliser (5 percent).

Asian respondents appear to be the most internet dependent with less than half of Singaporeans and Indians capable of lasting up to 12 hours without internet access compared to 86 percent of German, 77 percent of French, 75 percent of US and 70 percent of UK respondents.

32 percent of Singaporeans and 27 percent of surveyed Indians pick smart cities as their preferred choice for what the Internet will enable in the future. Respondents from the UK, France, Germany and the USA, meanwhile, feel that light speed connectivity will be more important.

The report by Tata Communications captured responses from 9,417 internet users across six emerging and developed countries – France, Germany, India (2,117), Singapore, the US, and the UK.