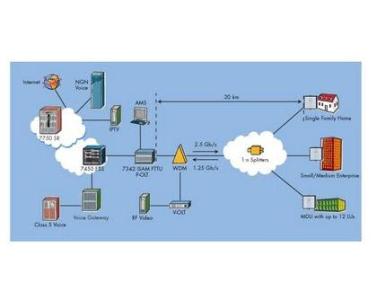 The significant growth is primarily driven by rapid expansion of its business in China and the U.S.

“It is exciting to see that our innovative, market-leading FTTH solutions are resonating with our customers, which is evidenced by the fact that we are growing faster than the market,” said Dave Geary, head of Alcatel-Lucent’s Fixed Access activities.

“The combination of recent wins with service providers around the world and renewed orders from existing customers shows that the industry appreciates our continued commitment to fiber-based access,” Geary added.

According to Dell’Oro and Infonetics, Alcatel-Lucent leads in all four regions.

In China, the telecom equipment vendor is the number-1 supplier of GPON gear to China Telecom as well as China Unicom.

In the Americas, Alcatel-Lucent is running the GPON deployments of the largest service providers such as Oi Brazil, Telmex Mexico, and Verizon US.

In Europe, Alcatel-Lucent leads in GPON deployments with Western European operators. It recently started to expand its business in Eastern Europe including a contract with Vivacom Bulgaria.

Alcatel-Lucent’s Intelligent Services Access Manager (ISAM)-based GPON solution has been deployed by more than 250 service providers around the world, and includes more than 160 FTTH projects.