BT CEO Philip Jansen has revealed the telecom operator’s key achievements during the June quarter of 2019. 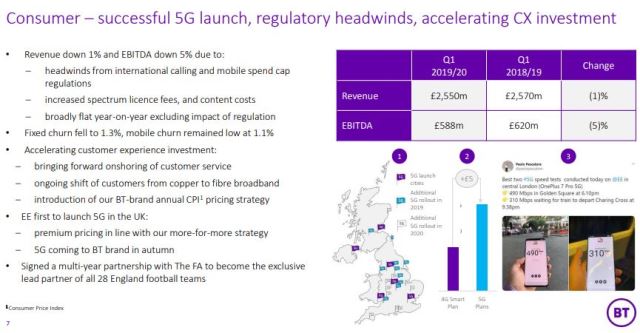 BT did not reveal the number of broadband and mobile customers it added or lost during the quarter.

The latest Ofcom report said UK had 26.7 million fixed broadband connections at the end of Q1 2019. BT’s share of fixed broadband lines was 34.4 percent, a decrease of 1.3pp year-on-year.

BT’s share of fixed voice service revenues was 41.9 percent, a decrease of 2.8 percentage points from the previous year.

BT’s share of fixed exchange lines (including PSTN and ISDN channels) was 38.6 percent in Q1 2019, a decrease of 0.4pp from the previous quarter.

BT, during the earnings report, did not reveal the number of 5G customers it added during the quarter. BT today said it launched a range of 5G devices for business with good early interest and take up, particularly amongst SMEs.

EE was the first operator to launch 5G in the UK with the five-city launch. The company’s premium pricing for 5G services was in line with its more-for-more strategy. BT will launch 5G under the BT brand in autumn.

BT said it spent £236 million on customer driven investments, £169 million on systems and IT, and £32 million on non-network infrastructure.

“We made good progress during the quarter, including launching the UK’s first 5G network, delivering an improvement to our group net promoter score for the twelfth consecutive quarter,” Philip Jansen said.

BT plans to roll out fiber to 4 million premises by March 2021, and it could connect 15 million by the mid-2020s if the UK government and regulator make it worthwhile.

Philip Jansen said taking fiber to all premises across the UK by 2025 would be a major feat of engineering that will require significant investment, planning and also manpower.

Philip Jansen said Ofcom needed to be clear about the return BT would be allowed to secure on its investment, given that the cost of roll-out for the whole country would be 30 billion pounds or $36.4 billion plus.