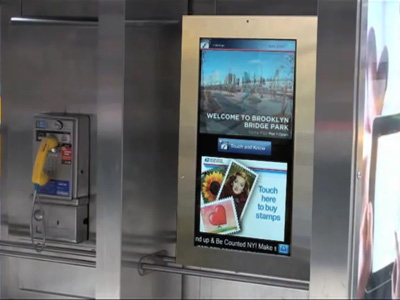 In the initial launch, City24/7 will be set up in ten places in existing payphone booths around Union Square.

Over the next several months, the number of installations will increase to up to 250 participating phone booths throughout the five boroughs.

In the first phase, 250 Smart Screens will b deployed throughout New York City. As these systems are implemented, City24/7, Cisco, and the City of New York will further integrate the platform with the addition of mobile applications, safety and security capabilities, city information feeds, and location-based advertising.

Once the Smart Screens have reached critical mass in New York City, City24/7 and Cisco plan to start the second phase, which includes expansion to more than a dozen U.S. and international cities.

“For the first time in history, cities are now home to more than half of the Earth’s population. These cities have become single-world urban areas — tied together by communication networks. Knowledge from these networks provides valuable insights to governments, people, and businesses — both large and small — to change industries, serve people, increase productivity, and create relevant consumer experiences,” said Jeff Frazier, senior director, Cisco Internet Business Solutions Group.

The street locations have free Wi-Fi access, and are equipped with near-field communications and Bluetooth.

“Our ruggedized outdoor high-definition LED touch-screen monitors were designed to be intuitive and user-friendly, and we are pleased to enable such an innovative project with our touch solutions,” said YK Cho, B2B senior vice president of LG Electronics.

“Our network is built on the idea that you should be able to connect and activate information through any device — anywhere,” said Tom Touchet, president and CEO of City24/7. “We’re excited to help power daily communications to the streets of New York, and to immediately and directly give back to the communities we serve.”

As part of a pilot program, DoITT has granted authorization for City24/7 to install SmartScreens in up to 250 existing payphone locations. City24/7 will be responsible for maintenance and/or repair of the SmartScreens for the life of the pilot program. No taxpayer money will be spent on the program, and the service will be free to all users.