Telecom networks in Cyclone Phailin hit areas of Andhra Pradesh and Odisha have gone off on Saturday night, according to several media reports. Meanwhile Internet search engine Google is trying to assist government and mobile operators with a number of initiatives.

Telecom operators, which can be the life savers in affected areas, have one again proved that they are not equipped to address calamity situations in India.

During the Uttarkhand flash flood as well, telecom networks were down.

The number of mobile and wireline users impacted in the coastal areas of Odisha and Andhra Pradesh is not known.

In Andhra Pradesh, telecom operators such as Bharti Airtel, Reliance Communications, Vodafone, Tata Teleservices, Idea Cellular, Aircel, BSNL and Uninor have mobile operations. The total number of mobile user base in the state is around 650,88,759, as per TRAI data for June 2013.

In Odisha, mobile service providers such as Bharti Airtel, Reliance Communications, Vodafone, Idea Cellular and Aircel have mobile operations. Odisha has a mobile user base of around 248,40,492.

In Andhra Pradesh, telecom players such as the state-run BSNL, Airtel, Reliance Communications, Tata Teleservices and Vodafone have wireline business.

In Odisha, telecom service providers – BSNL, Reliance Communications and Tata Teleservices have limited wireline connections. The total number of wireline users in Odisha is around 367,387.

Though telecom networks are down in several areas, search engine Google is trying to support people who want help and information.

Google India, as part of assisting the affected people, has set up a Crisis Response team to assist the governments in rescue and rehabilitation of cyclone victims.

“Google has come forward to offer their help. We are coordinating with them. It will help us collect information concerning the victims of the cyclone and track their status,” said Andhra Pradesh minister for Information Technology and Communications Ponnala Lakshmaiah.

Times of India reported that Google has launched a Person Finder to help those displaced by the storm to reconnect with their families. It is an open source software that allows individuals to post and search for the status of relatives or friends affected by a disaster. Google is also working with Airtel, India’s # telecom service provider, to see if they can send an SMS blast to all users alerting them of the cyclone. 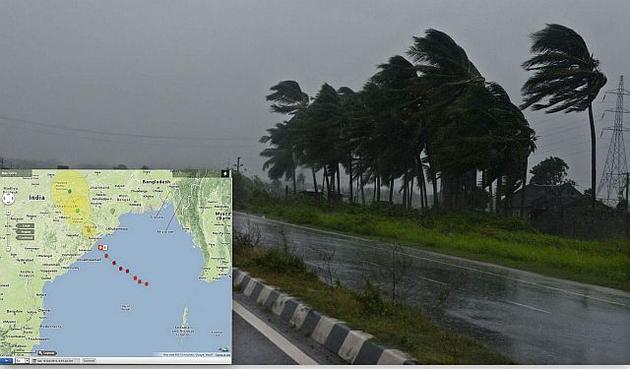 Google is launching a crisis map, which would mark the shelters, power outages and other resources. The crowd-sourced map will display as to the points where the cyclone has hit. It also has a list of helpline numbers. As the search engine giant does not have enough sources concerning the location of the relief camps set up, they have appealed to the concerned governments seeking their help on the same.

Meanwhile, the AP government is also coordinating with the telecom service providers to ensure 24/7 connectivity. They have already alerted 527 fishermen villages and of all the 22,997 boats except two boats that were in the sea have returned to shore. The IT department is also ensuring that video-conferencing will be available 24/7 in all government departments to ensure a flow of communication.

Meanwhile, Greenpeace said on Saturday that such intense and destructive storms are likely to become more frequent in the future as global warming intensifies.

“Even a small increase in the ocean’s warmth can turn tropical disturbances into hurricanes or pump up an existing storm’s power,” said Greenpeace India member Biswajit Mohanty.