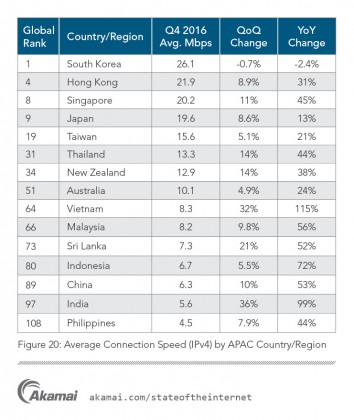 Ranked at 97 globally, Internet speed in India rose 99 percent to 5.6 Mbps in Q4 2016 from the same quarter previous year and rose 36 percent from the previous quarter. India is home to mobile operators such as Reliance Jio Infocomm, Bharti Airtel, Idea Cellular, Vodafone, BSNL, among others.

South Korea has the highest average Internet connection speed globally at 26.1 Mbps in the fourth quarter.

Average mobile connection speeds ranged from a high of 26.8 Mbps in the United Kingdom to a low of 2.9 Mbps in Venezuela.

30 countries had an average mobile connection speed at or exceeding the 10 Mbps broadband threshold, up from 24 in the previous quarter, while 58 countries achieved average speeds at or above the 4 Mbps broadband level, up from 52.