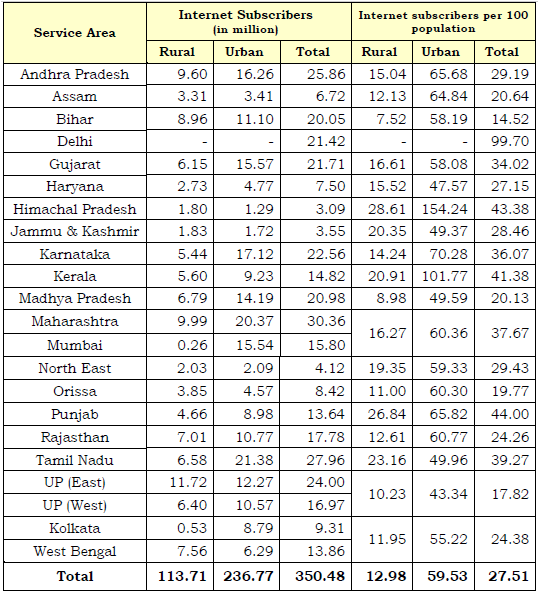 Internet and broadband tele-density is 13.64 in rural areas against 61.98 in urban locations, according to TRAI’s September 2016 report.

A monthly data pack of about 100 MB per user would be reasonable to address the basic digital needs of those users, including carrying out of digital financial transactions. After the expiry of 100 MB of data in a month on a mobile connection, the free data services will be suspended till the beginning of the following month.

The number of phone users in rural India is 445.94 million against 603.80 million in urban locations across the country.

TRAI says the average charge per MB of wireless data is about Re 0.20 per MB. Service providers in their latest offerings are charging Rs 1,499 for a 15 GB pack i.e. Re 0.10 per MB. The scheme will cost an amount of Rs 10 per subscriber per month.

This scheme will provide free data benefits to smart phone subscribers in rural areas. This would translate into to a cost of approximately Rs 600 crore to provide 100 MB of free data to 50 million users for a period of one year.

“To bridge the affordability gap for the persons residing in rural areas and to support Governments efforts towards cashless economy by incentivising digital means, the Authority recommends that a scheme under which a reasonable amount of data, say 100 MB per month, may be made available to rural subscribers for free,” TRAI said.

The cost of implementation of the scheme may be met from USOF.

To increase participation of other entities for incentivizing free data, there is a need to introduce third party (Aggregator) to facilitate schemes which are TSPs agnostic and non discriminatory in their implementation.

Scheme for free data must be TSP-agnostic, must not involve any arrangement between the TSP and the aggregator/content provider and should not be designed to circumvent the “The Prohibition of Discriminatory Tariffs for Data Services Regulations,” notified on 8 February, 2016.

The following mechanism is recommended

# The Aggregators will need to register with DoT

# The registrant must be a company registered under Indian Companies Act, 1956.

# The validity of registration shall be 5 years.

# The registrant shall not either directly or indirectly, assign or transfer the Registration in any manner whatsoever to a third party either in whole or in part.

Further, a white paper on broadband regulations and policy in Asia-Pacific region, released by ITU in November 2016, lists India below Vietnam and Sri Lanka in terms of fixed broadband penetration. India’s performance of 7 percent penetration of broadband is well below the world average of 46 percent.