The Visual Networking Index (VNI) report by Cisco predicts that more traffic will be created in 2022 than in the 32 years since the internet started in 1984. 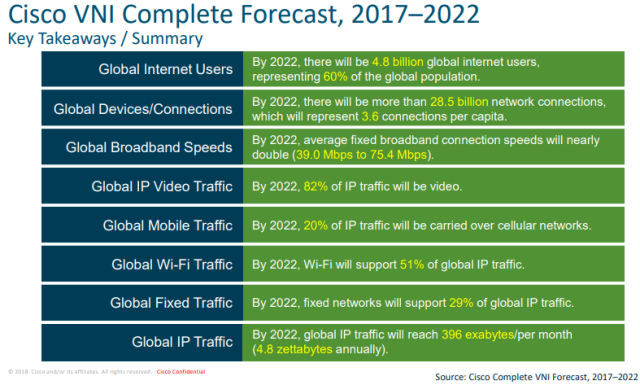 The latest Ericsson Mobility Report released in November 2018 said mobile data traffic in Q3 2018 grew 79 percent, the highest rate since 2013. Mobile data traffic will increase by a factor of five between 2018-2024. 5G networks will carry 25 percent of mobile traffic by the end of the period, Ericsson said today.

4.8 billion customers or 60 percent of the population will be internet users by 2022. In addition, 28 billion devices and connections will be online. Video will make up 82 percent of all IP traffic, Cisco said today.

Average internet traffic will grow by nearly four times (30 percent CAGR) over the same period to reach 1 petabyte by 2022.

There will be 28.5 billion fixed and mobile personal devices and connections by 2022, up from 18 billion in 2017—or 3.6 networked devices/connections per person, from 2.4 per person. 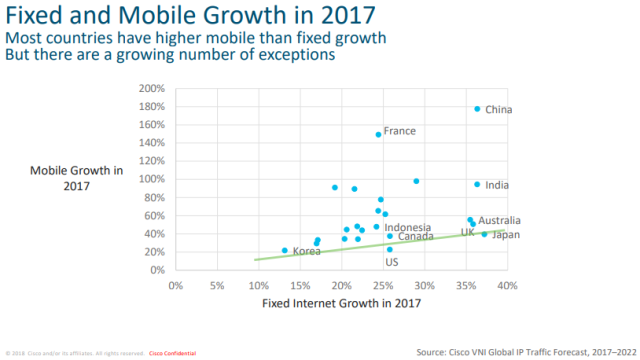 More than half of all devices and connections will be machine-to-machine by 2022, up from 34 percent in 2017. That’s 14.6 billion connections from smart speakers, fixtures, devices and everything else, up from 6.1 billion.

Average Wi-Fi connection speeds will more than double from 24.4 Mbps to 54 Mbps.

Average mobile connection speeds will more than triple from 8.7 Mbps to 28.5 Mbps.

Gaming traffic is expected to grow nine-fold from 2017 to 2022. It will represent four percent of overall IP traffic in 2022.

The reports from Cisco and Ericsson indicate that telecom operators need to make huge investment in networks to manage the growth in Internet traffic.