Telecom Lead Asia: Bharti Airtel is in talks with Liberty Global and a couple of private equity firms to sell 25 percent stake in its direct-to-home (DTH) business.

A Reuters report says Liberty Global did not confirm the development. Airtel does not want to comment on speculation.

If Liberty Global is entering the Indian market, it has the potential to revolutionize the Indian pay TV market. It can pump in additional Capex into Airtel’s DTH business. In Q4 2012, Airtel digital TV (satellite) services saw Capex (capital expenditure) of INR 1,351 million.

The Indian cable TV industry’s total subscription revenue is estimated to grow to $6.4 billion by 2020 from $4.2 billion in 2011, according to Media Partners Asia.

The Indian DTH industry is poised to grow to 60 million subscribers by the end of 2013.

According to Media Partners Asia’s (MPA) annual research report, the DTH subscriber base in India will grow from 2.3 crore in 2010 to 6.4 crore by 2015, and 8.3 crore by 2020. The US is expected to be the second largest DTH market with 3.5 crore active subscribers.

At the end of December, Airtel digital TV had 7.9 million customers on its DTH platform, up 12 percent from 7 million a year earlier. 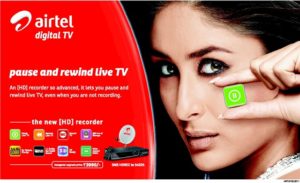 The digital TV business of Airtel posted sales of Rs 428 crore for the quarter ended December, accounting for 3 percent of the company’s total revenue.

Airtel’s average revenue per user in the DTH business increased 16 percent to Rs 186. Airtel DTH service is available in 632 districts across the country.

Earlier this week, Airtel raised $1 billion through an overseas bond sale. The sale was the largest by an Indian telecom company and the money raised will go towards repaying the firm’s high-cost debt. The 10-year unsecured bonds had a coupon of 5.125 percent a year. At the end of the December quarter, Bharti’s total debt was $11.7 billion.

The ongoing digitization initiative is putting pressure on DTH business. The government has mandated cable TV to be digitized in a phased manner across India by 31 December 2014.

As per the data received from the DTH operators and the MSOs, as on 22 February, 2013, 87.7 lakhs Set Top Boxes (STBs) have already been installed in Phase-II cities against the target of 1.60 crore, registering an achievement of 55 percent digitisation. Out of a total of 87.7 Lakhs, DTH connections accounted for 40.7 lakhs, whereas cable STBs accounted for 47.0 lakhs.