Networking major Cisco has extended its worldwide STB revenue share lead in the first quarter of 2013.

The other major STB vendors are Pace, Motorola and Echostar.

Driven by India and China, cable set-top boxes bucked the seasonal trend in the first quarter of 2013, notching modest gains in both revenue and shipments. 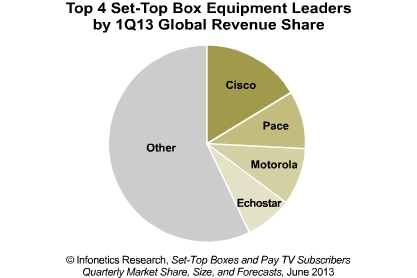 56 percent of STBs shipped in Q1 were basic standard definition boxes, pointing to a larger shipment mix to emerging markets like China and India, where the focus is on digitization rather than advanced services.

China Telecom just released a new tender for smart IP STBs for its growing IPTV services in Shanghai and Guangdong, and it is expected this will lead to an increase in IP STB shipments later this year.

Infonetics forecasts telco IPTV subscribers will grow at 17 percent compound annual growth rate from 2012 to 2017, the highest of any subscriber category.