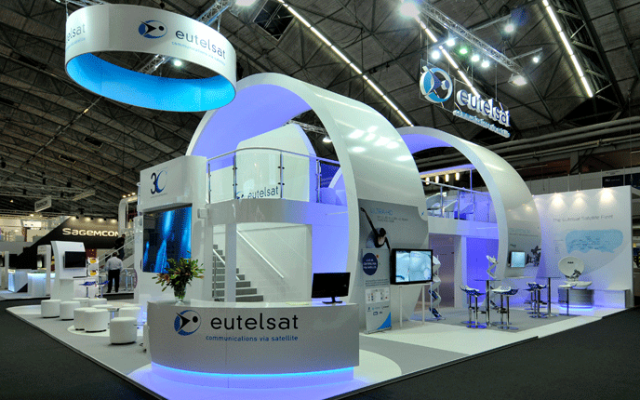 Eutelsat CEO Rodolphe Belmer said: “We are encouraged by the resilience of our core Broadcast business, and we continue to target a return to slight revenue growth in FY 2019-20 on the back of the materialization of delayed business, traction in broadband and the availability of incremental capacity with EUTELSAT 7C and EUTELSAT Quantum.”

Pure Broadcast revenues were stable. Eutelsat has secured a multi-transponder contract for a new DTH platform on EUTELSAT 65 West A. Other projects in the pipeline were delayed for non-structural reasons and should materialize in the near future.

At 31 March 2019 the total number of channels broadcast by Eutelsat satellites stood at 7,021, up 2 percent and by 3 percent stripping out the effect of the disposal of EUTELSAT 25B. HD penetration rose 11 percent to 1,509 channels, implying penetration of 21.5 percent of channels compared to 19.7 percent a year earlier.

Government services revenues were €39.9 million, down 1.0 percent – reflecting incremental business secured last year at the 174°East orbital position covering Asia-Pacific, and the low outturn of the Fall 2018 renewal campaign with the US Government.

Fixed data revenues stood at €30.4 million, down 17.8 percent – reflecting pricing pressure in a competitive environment as well as softer volumes in Latin America.

Fixed Broadband revenues stood at €19.1 million, down 9.7 percent – reflecting a decline in European Broadband with scarcity of capacity in certain countries and the transition to a new distribution model which is leading to a decline in activity with legacy distributors.

Mobile Connectivity revenues reached €19.8 million, up 4.7 percent – reflecting entry into service of the UnicomAirNet contract on EUTELSAT 172B, the carry-forward impact of the contract with Taqnia at 3°East and 70°East and the capacity contracts on KA-SAT.

Eutelsat signed a multi-transponder agreement with Speedcast for capacity dedicated to Maritime Connectivity on EUTELSAT 133 West A, representing another win in this vertical following the conclusion of a multi-satellite deal with Marlink.

Eutelsat said the order backlog stood at €4.4 billion at 31 March 2019 versus €4.6 billion in December 2018, reflecting natural backlog consumption in the absence of material Video renewals. It was equivalent to 3.1 times 2017-18 revenues. Video Applications represented 76 percent of the backlog.