Telecommuting is a wildly growing trend in today’s business sphere. The advances of technology, especially since the widespread use of the facsimile and email in the 1970s and 1980s, has had a profound impact on the ability to work from home or satellite offices. Even more recently, the development of digital audio and video conferencing has helped telecommuting become an even more attractive option for companies.

Recently, Reuters released a statistic that estimated nearly one in five of every worker in the world regularly telecommutes instead of physically going to an office for the workday, and almost 10 percent of the world’s working population actually works at home every day. Because of this great demand for telecommuting, technological developments are keeping pace with this trend in order to help employees function outside of a traditional office environment.

While on the surface it might seem that telecommuting is just easier for the employee, it can actually have significant financial benefits for the companies that adapt and incorporate telecommuting into their workflow. Not only does the employee benefit financially from commuting expenses (driving time, fuel costs, parking, subway passes, etc.) but the company sees a higher return on investment as well. This includes a lesser amount of office space required, a greater time available for the employee to work, a more efficient workflow without distracting office environments, and other intangibles. Advancements in communications technology, like Blue Jeans video sharing, have made telecommuting a definite option for many companies.

Some estimates have said that modern American companies would save an estimated $650 billion per year by implementing telecommuting options, an amount that provides a great return on investment for the technology required. In addition, the employees themselves would save an average of $2,000 to $7,000 on commuting expenses.

There is a moderate amount of debate within the business community on the efficiency of telecommuting, but it is generally accepted that working outside of the corporate sphere can have a great deal of success for some individuals. Autonomy can help the individual break out of the cubicle-limited mindset of many modern companies, and it increases productivity, work satisfaction, creative problem solving, and overall quality of work.

Without a good communication system in place, many telecommuters will suffer from a lack of task knowledge and feedback. Relying only on the written word (through emails, for example) and short phone calls may leave the telecommuters in an ambiguous state regarding projects and relationships with others within the company. The solution many companies have found is the integration of video conferencing to their daily workflow: though there may be a physical distance in between colleagues, with Blue Jeans video sharing the telecommuter is able to directly interface with their managers, colleagues, and other telecommuters. 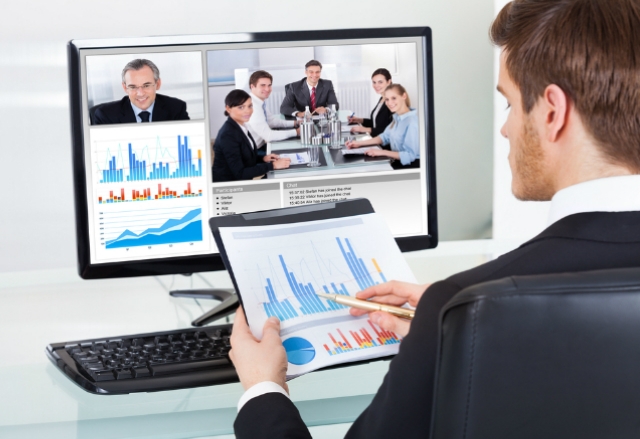 There are some changes that must take place in the workflow of a business in order for telecommuting to work properly. It is important that a good system is in place for the employee and employer to properly communicate back and forth during the duration of a project. Email, web-based content management solutions, and audio/video sharing are all technological solutions that should be appraised as possible beneficial tools to enable a clean and efficient pipeline.

Broadband availability even in a home setting has become the norm in the developed world, with speeds increasing constantly. The stability of an internet-based communication network has shown to be reliable and essential to the businesses of today.

Until recently, one of the drawbacks of telecommuting was the lack of face-to-face interaction between colleagues and a reduction of direct supervision by managers. However, the advent of video conferencing, screen sharing, and video chat has enabled this to no longer represent a significant hurdle to communication. With the ability to instantly share documents, screenshots, videos, and other rich media to others located anywhere in the world, many software-based telecommuting solutions has helped telecommuting evolve into something no different than working in the office next door.

For increased profit margins, employee retention, productivity, and a higher return on investment, many companies are considering and adapting telecommuting as a viable option for their business model. To make the most of this framework, they are turning to several technological solutions to facilitate proper communications and efficiencies. Among the most important is a stable, industry-standard service like Blue Jeans video sharing.

Telecommuting, along with benefits both obvious and hidden, is proving to be a significant benefit to many companies. The possibilities provide an exciting and steadily increasing development to the traditional business model.

Awestruck by Star trek as a kid, Jake Anderson has been relentless in his pursuit for covering the big technological innovations which will shape the future. A self-proclaimed gadget freak, he loves getting his hands on every piece of gadget he can afford.