The first major announcement — on NFC — at Mobile World Congress 2013 was Nokia’s Lumia 720 with NFC. Its Lumia 520 phone does not have NFC.

MasterPass will allow consumers to make payments from digital wallets or traditional credit cards. Consumers can rely on NFC or QR codes scanned with optical readers if such technologies are supported by the banks and stores that they use.

The partnership will provide payment solutions to a new generation of customers, both banked and underserved, to VimpelCom’s 212 million customers in 18 countries.

Gemalto is demonstrating NFC applications. This proof of concept for enterprise applications transform mobile phones into secure and convenient identification and authentication devices for the workplace.

Utilizing the company’s UpTeq NFC SIM, Gemalto’s experimentation enables secure and fast entry to buildings as well as provide strong authentication on PCs, laptops, IT networks and other company services with nothing more than a tap of the phone. 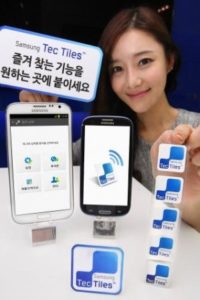 In addition, Gemalto has been delivering its UpTeq NFC high end SIM to KDDI since March 2012. Launched in October 2012, the service will enable convenient flight boarding for more than 37 million passengers who fly with Japan Airlines (JAL) each year.

Kenichi Bandou, Senior Manager, KDDI. “The level of security it provides ensures continued trust between JAL and our customers. Our touch-and-go mobile ticketing application allows passengers to complete their check-in conveniently and with minimum hassle.”

Meanwhile, China Unicom — with more than 220 million subscribers in which over 60 million are on 3G — has selected Gemalto’s UpTeq NFC SIM card to secure its mobile wallet program.

The Unicom Merchants’ Bank mobile wallet is the first NFC payment service being launched in China, in a joint collaboration between China Unicom and China Merchants Bank (CMB) for the mobile wallet itself.

Visa and Samsung announced a global alliance to accelerate the availability of mobile payments globally.

According to the agreement, financial institutions that are planning to launch mobile payment programs will be able to use the Visa Mobile Provisioning Service to securely download payment account information to NFC-enabled Samsung devices.

In addition, Samsung has agreed to load the Visa payWave applet onto its mobile devices featuring NFC technology.

Jim McCarthy, global head of product, Visa, said: “Samsung devices enabled with Visa payment functionality will no doubt be a powerful product offering – especially in markets where paying with a mobile device is becoming commonplace.”

In yet another announcement — that supports NFC — China Mobile, Japan’s NTT Docomo, and Korea’s KT published requirements on Monday for international roaming with NFC.

Recently, Identive Group announced that its Tagtrail NFC mobile services platform has been selected by major corporate exhibitors to deliver marketing content to visitors throughout The Connected City exhibit – a real city street at the heart of the 2013 GSMA Mobile World Congress.

Neil Garner, founder and CEO, Proxama, said: “2013 promises to be the year when the mobile, financial and marketing industries invest significant resources into developing NFC initiatives that will become part of people’s everyday lives. It is important that we continue to develop new and exciting executions to capture the public’s imagination which in turn will enable commerce to start reaping a return on their investments in this new technology.”