IDC estimates telecom infrastructure market — consists of hardware and software compute and storage platforms (including software-defined storage and compute) — will be nearly $17 billion in 2023 from $13.1 billion in 2018, growing at a CAGR of 5 percent.

Dell Technologies with 31.5 percent share, followed by NetApp with 9.9 percent, Hewlett Packard Enterprise with 9.6 percent, Huawei with 7 percent, Hitachi with 6.2 percent and IBM with 6 percent share are the leaders in the worldwide enterprise storage market during the third quarter of 2019.

Storage market share of Dell Technologies, NetApp and HPE dipped during the third quarter of 2019.

The IDC report said the shift to a software-defined infrastructure, in conjunction with the imminent adoption and deployment of 5G technologies, is helping telecoms position themselves for future expansion of next-generation communications services and, along with it, the necessary supporting compute and storage infrastructure, Kuba Stolarski, research director for IDC’s Infrastructure Systems, Platforms and Technologies group, said. 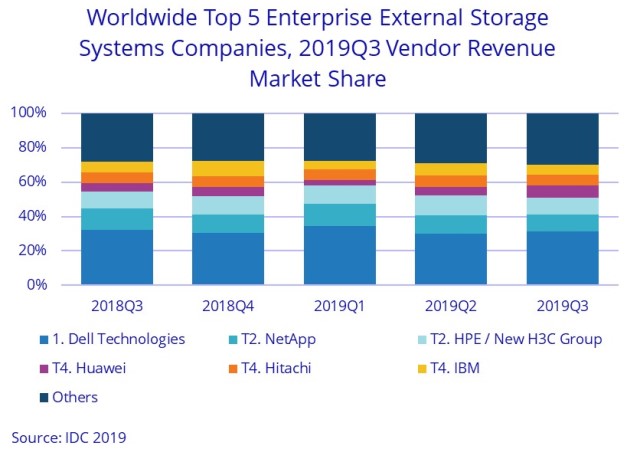 The amount of data created and consumed by consumers and businesses will continue to grow over the coming years. Shifting data-intensive users and use cases to 5G will allow network operators to more efficiently manage network resources, improving performance and reliability as a result, IDC said.

According to data based from Ovum, there are now four million 5G connections globally as of the third quarter of 2019.

Chris Pearson, president of 5G Americas said: “Early adopters in 5G technology are taking advantage of new capabilities now being offered by 5G networks that have come online over the past quarter. We expect to see a strong ramp up in 2020 as more devices become available and coverage expands throughout the world.”

There are now 50 commercial 5G networks globally, which adhere to 3GPP standards. That number is expected to increase to 67 5G commercial networks by the end of 2019, according to data from TeleGeography.

Global spending on enterprise OEM storage systems grew 1.3 percent year over year to $6.6 billion during the third quarter of 2019.

Total external OEM storage capacity shipments were up 6.8 percent year over year to 17.3 exabytes during the quarter.