Reliance Jio is investing more than $20 billion for the all India 4G network. Though the company had ran a free offer during September 2016 to March 2017, Jio could add more than 100 million unpaid customers on its 4G network. 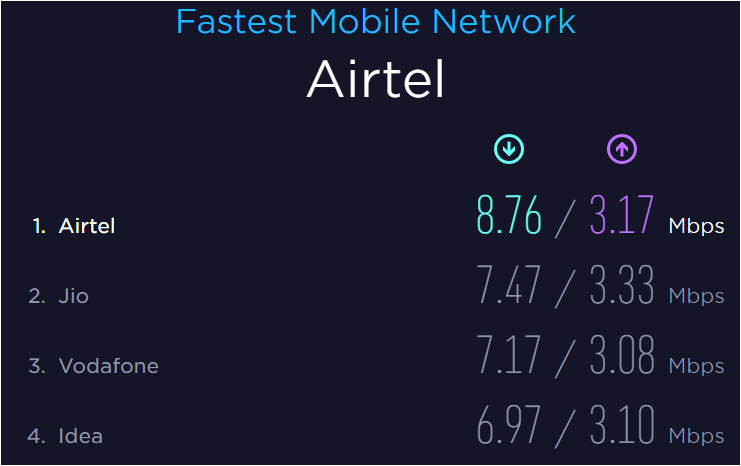 Reliance Jio is not happy because Ookla has presented Bharti Airtel as the best network operator in India for 2016 — after testing during Q3 and Q4 of 2016.

Reliance Jio has been ranked second with 7.47 Mbps download and 3.33 Mbps upload speed.

Vodafone India has been ranked third with 7.17 Mbps download and 3.08 Mbps upload speed.

Idea Cellular has been ranked fourth with 6.97 Mbps download and 3.1 Mbps upload speed.

There are differences in the speed test result by Ookla and TRAI apps. TRAI reveals the exclusive 4G speed in these two charts. On the other hand, Ookla maps both 3G and 4G networks and comes out with one result.

The below chart from TRAI shows the upload speed.

“Data accuracy and neutrality is of the utmost importance to Ookla and the company goes to great lengths to ensure that the information collected on any Speedtest internet test is verifiably correct. Ookla fully stands behind the accuracy and reliability of the methodology used to designate Airtel as India’s Fastest Mobile Network,” Ookla said.

Ookla said much of the commentary from Reliance Jio has focused on dual SIM devices. The carrier displayed in the Speedtest Android application is based on the “Active Carrier” value returned by the device.

Due to limitations of the Android platform, the “Active Carrier” does not always indicate the actual data provider in devices with multiple SIMs. In these situations, Ookla applies additional data sources and mechanisms during post-processing to help determine the actual data carrier being tested.

Ookla matches the connection IP address recorded during the test to known carrier IP blocks. This enables Ookla to determine the actual data carrier with a high degree of confidence. Airtel’s margin of victory increased when the complete analysis was performed.