The U.S. and China are the world’s largest DAS markets and are expected to remain so through at least 2017 due to the number and size of their stadiums, convention centers, and transportation stations and ports. 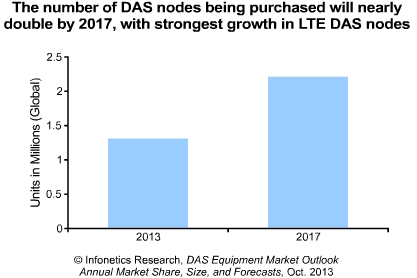 Global DAS revenue will grow at a CAGR of 3 percent from 2012 to 2017 and DAS node shipments will double, driven by a combination of coverage and capacity improvements in specific venues, said Infonetics Research.

Sports and entertainment stadiums make up the bulk of the DAS business and are considered in-building or indoor DAS; outdoor DAS is a niche market.