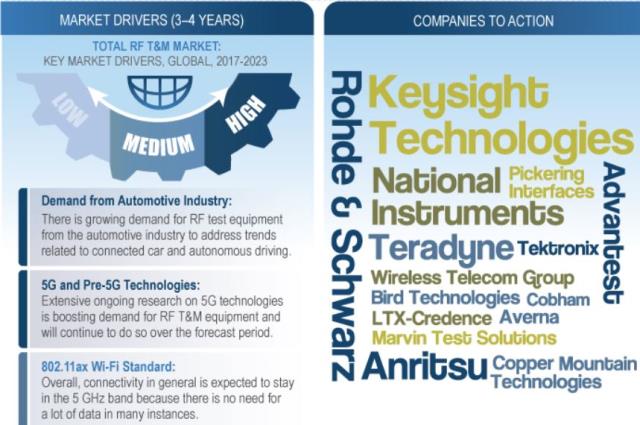 Demand from the connected car industry, advancements in wireless standards, and pre-5G and 5G technologies are driving the growth in the RF testing market. Keysight Technologies, Anritsu, among others, are the top T&M suppliers in the global RF testing segment.

The telecom analysis report said RF T&M market is expected to generate over $30 billion in new revenues by 2023.

Asia Pacific will be the largest and fastest growing region for RF T&M technology vendors, with estimated revenues of $1.99 billion by 2023. Asia Pacific’s T&M market will achieve higher growth than other regions, driving its share to 43.2 percent in 2023.

“Asia Pacific has become the manufacturing hub of the world and holds special importance for vendors, but it is also making inroads in research and development (R&D), which will further increase its importance going forward,” said Jessy Cavazos, Measurement & Instrumentation Industry Director at Frost & Sullivan.

The Asia Pacific region will create significant opportunities for T&M vendors in the aerospace & defense industry.

Adoption of wireless communications standards like LTE and Wi-Fi is driving demand for more RF testing, and important R&D investments are being made in automotive radar and target simulation.

Research on 5G technologies is increasing demand for RF T&M equipment. Demand will go to higher frequencies in the long term to the detriment of the < 8 GHz market.

The penetration of modular electronic instrumentation is expected to continue to align with the multi-channel nature of upcoming end-user technologies; the CAGR from 2016 to 2023 for the modular RF T&M market is 14 percent.

NarrowBand IoT and mobile IoT standards such as Bluetooth Low Energy (BLE), LTE-M and SigFox LoRa will create a new part of the market. This trend translates into an increase in parallel testing and generates a market for low-cost instrumentation.