Driven by telecom markets such as India, Indonesia and the Philippines, more than 100 million people are using Facebook For Every Phone each month.

Facebook For Every Phone enables people around the globe to connect to the people.  Millions of people in developing markets like India, Indonesia and the Philippines are relying on this technology to connect with Facebook, without having to purchase a smartphone.

Facebook for Every Phone app works on more than 3,000 different types of feature phones from almost every handset manufacturer.

The app includes Facebook’s features such as News Feed, Messenger and Photos.

It also has partnerships with mobile operators around the world to offer free or discounted data access to Facebook For Every Phone. 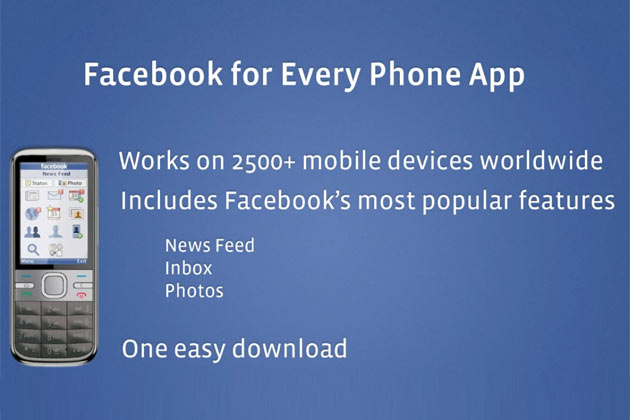 Facebook For Every Phone is powered by Snaptu, an Israel-based mobile platform. Snaptu’s platform uses the power of servers to accelerate and optimize the way mobile apps work, and is the key to providing a great user experience on low-end devices.

Facebook for Every Phone App is optimized  to use less data than other Java apps and mobile sites,  which is a boon for users on limited data plans.

Javier Olivan, vice president of Growth and Analytics  at  Facebook, said: “People’s first experience on the Internet is often  on Facebook  and this product has made it easy for people to have a great  experience, no matter what kind of phone they use.”