Telecom Lead America: Twitter will generate nearly $1 billion in ad revenue next year due to a surge in mobile advertising on its Web microblogging service.

Mobile ads will account for roughly half of Twitter’s advertising revenue this year and will make up more than 60 percent of the company’s ad revenue by 2015, according to research firm eMarketer.

The increasing popularity of Twitter’s mobile ads – introduced in March 2012 – caused eMarketer to raise its 2014 ad revenue estimates for Twitter to $950 million, versus its previous estimate of roughly $800 million.

Twitters’ ad revenue this year will total $582.8 million, according to the report, roughly double what it was in 2012.

With more than 200 million monthly users, Twitter is among the Web’s most popular social networking services, along with Facebook, and is expected to float IPO within two years.

Facebook said in January that its mobile ad revenue doubled from the third quarter to the fourth quarter, representing roughly 23 percent of its $1.33 billion in fourth-quarter ad revenue.

Twitter has ultimately benefited from the increased focus on mobile by competitors like Google and Facebook, which have expanded their own mobile ad offerings and worked to convince advertisers to shift dollars to mobile devices, according to eMarketer. 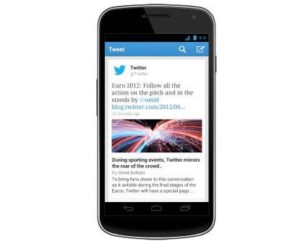 eMarketer said its revenue forecasts are based on analysis of reports that track media buying trends, Twitter usage data and interviews with executives at advertising agencies, online publishers and others.

Meanwhile, third-party apps dominate the consumption of online video on mobile devices among all participants in the seven Arbitron Mobile-based measurement services in the U.S., U.K., France, Germany, China, Japan, and Indonesia.

An average of 88 percent of all online video minutes viewed across the seven panels are accessed via mobile apps such as YouTube; Netflix; and QIYI Video, the leading online video mobile app in China.

Online video consumers in the China smartphone panel (operated by iResearch) spend the most time with mobile video apps — 350.1 minutes each month, followed by mobile videophiles in the United States panel — 230 minutes/month and in Indonesia–181.5 minutes/month.