Global Cloud Xchange (GCX), a subsidiary of Reliance Communications, will invest nearly $45 million into the Asia Pacific region to connect Mumbai and Singapore with a new subsea fiber cable system.

“The entire cost of the venture is USD 200 million in which we will be putting in $40-45 million over a period of 24 months, and the balance will come from our three other partners including a telecom player,” said Global Cloud Xchange CEO.

Revenue from the new venture is likely to start coming in within 18 months.

The new ICX cable infrastructure is part of the company’s strategy to provide a direct subsea route to bridge the gap in the emerging markets corridor, especially delivering a direct Mumbai-Singapore route to bypass the current outage-prone terrestrial routes between Mumbai and Chennai.

“With Singapore as a regional hub and a gateway for multinational companies doing business across India and emerging markets, the ICX cable will complement GCX global network infrastructure for direct connectivity to major business centers in Asia, the Middle East, North America and Europe,” Barney said. 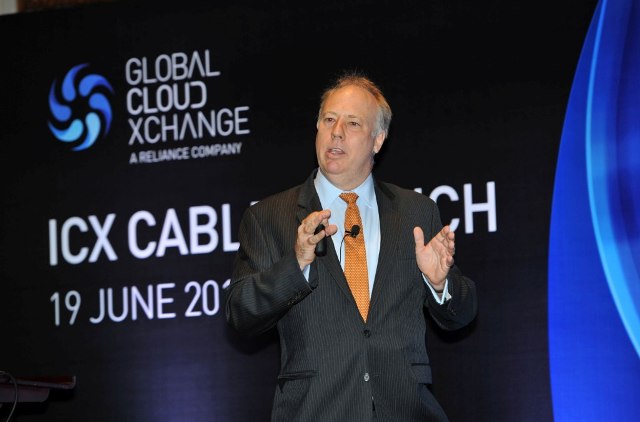 Based on 100G technology, the ICX cable will be a four-fiber pair system with initial design capacity per fiber pair at 80x 100G using next generation coherent submarine fiber.

“The new ICX fiber system, which runs around 5,060 km between Mumbai and Singapore, will also have a branch landing in Thiruvananthapuram and/or Chennai,” said Global Cloud Xchange COO Wilfred Kwan.

India’s international bandwidth demand requirements will increase over 10-fold between 2013 and 2020.

Barney said the new ICX system will be ready for service in Q2 2016 to fill key gaps as bandwidth requirements continue to increase. Submarine cable vendors and additional partners for the ICX subsea cable are being finalized. Supply contract will be awarded by the third quarter of 2014.