The report does not talk about the market share of both Huawei and Ericsson.

Infonetics Research noted that the global policy management software market reached just over $1 billion in 2013 and is on target to become a $2.5 billion market by 2018, with mobile deployments driving much of the momentum.

VoLTE continues to be a major driver behind policy management growth as operators seek to ensure quality of service (QoS) for voice traffic.

There is increased interest in policy management among fixed line operators looking to implement more innovative pricing and service models, and the recent U.S. court decision on net neutrality is likely to further this trend. 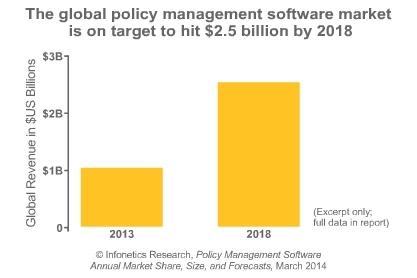 As operators develop network functions virtualization (NFV) strategies, policy is emerging as a clear target for virtualization and is likely to play a key role in software-defined networking (SDN) as well, Infonetics Research said.

“The explosive growth we’ve seen in the policy management market over the last few years has slowed to an extent in the more developed markets, where many of the major operators have made their vendor selections, often in conjunction with their LTE deployments, and ongoing spending is related to license expansions and additional use cases,” said Shira Levine, directing analyst for service enablement and subscriber intelligence at Infonetics Research.

However, momentum continues in emerging markets in regions such as Asia, Africa, and Eastern Europe, where the competitive environment is often intense and growing smartphone adoption is driving mobile broadband consumption.