Telecom Lead India: The Nokia Lumia 620 is a mid-range smartphone from Nokia running Microsoft’s Windows Phone 8 operating system. The Lumia 620 packs impressive specifications for its price, and with the trendy looks and good camera, Nokia’s got a real winner in their hands.

Before we begin, a quick run-down of the specifications packed by this mid-range device. 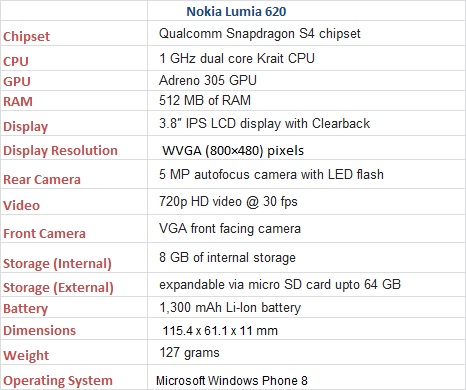 The Lumia 620 holds a unique design. The phone has rounded edges and curved sides that lead to a colorful back cover. Yes, the Lumia 620 is colouful to say the least. Available in half a dozen color options (it’s just the changing of the back cover) that include light green, yellow, white, black, sky blue and pink, the Lumia 620 pretty much is a definition for customizability. Overall, the design of the phone is a departure from the traditional design of phones we see in the market (flooded by the look-alike Samsung Galaxy series for now). Nokia does get its design right (as we have seen that in the past as well, just have a look at the N9).

The phone feels solid to hold, and the weight feels good enough to give a nice feel while holding the phone in your hand. At 11 mm thickness Nokia does leave behind the slim and sleek approach of modern smartphones, but then again we have seen that think doesn’t necessarily mean bad (take the Lumia 920 for example). The build quality otherwise seems solid. The phone has some bulk for its screen size, and its bezels aren’t really small. We have a tiny complaint with the excessive bezel at the bottom of the display to an otherwise good looking phone. 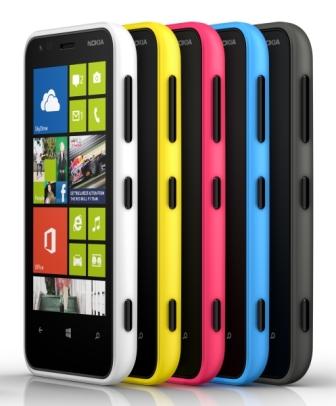 User Interface & Ease of Use

If you’ve seen one Windows Phone 8 running smartphone, you’ve pretty much seen it all. The UI is virtually identical to that of the flagship Lumia 920, and that is actually a good thing. Microsoft has done a good job with optimizing Windows Phone 8 in a way that mid-range and flagship phones get to enjoy the same UI. You have a Live Tiles based UI which can be scrolled up or down. Swipe the screen to the right to view the apps list, in alphabetical order. You can change the primary colour of the tile to match your phone’s case cover giving it a cool synchronized effect.

Windows Phone 8 is definitely a pretty UI, and it’s designed to be easy to use. First timers don’t have much of a learning curve ahead as everything is pretty straightforward. What’s lacking here is a proper notifications panel, as well as the ability to set custom wallpapers on your home screen. The black back ground is great, but sometimes a little bit of (multi) colours wouldn’t hurt anyone, eh Microsoft?

The keyboard is well spaced. Although the stock keyboard lacks SWYPE like features, the accuracy of the keyboard is spot on. Nokia does have some useful additions to the keyboard. Hindi language is on-board, the the keyboard packs line prediction as well (completing commonly used lines).

The Lumia 620 packs a 3.8 inch IPS LCD display. Thanks to IPS technology, we’ve got very impressive viewing angles on the Lumia 620 (certainly better than the Xperia Z I recently held). Beyond that, the LCD display gives you pretty accurate colours. I mean sure you won’t get those deep blacks and infinite contrast ratio of the higher end Lumias that pack an AMOLED display, but for a budget device we are more than impressed. The WVGA resolution is a bit on the lower side, but combine that with a modest 3.8 inch size and the individual pixels become harder to find (simply put, it’s good).

Another thing that we noticed is that sunlight legibility is simply stunning. We tried the phone under direct sunlight at about 12:30 pm (in Manipal, it’s pretty sunny here) and even against the Yellow Tiles (the colour scheme that was set at that time), we hardly noticed a difference under the sun. Good job by Nokia with their Clearback technology.

The Lumia 620 packs loud in call volume. Add to that a well implemented noise cancellation and both the people talking end up listening to crisp voice. 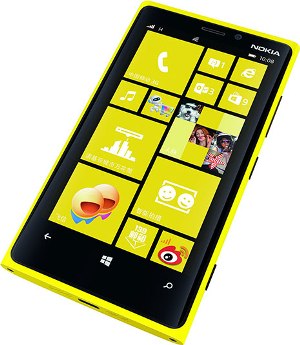 Gone are the days when Microsoft’s App Store had limited apps. The number of apps are growing (are already upwards of a 100,000) and most of the quality apps are already present. We won’t be reviewing the Windows Phone App store in this review as this is a device specific review.

Browsing on the Lumia 620 is fluid as we’d expect. Internet Explorer has come a long way and nobody would have expected it to perform so well. Opening heavy websites, pinch to zoom, desktop mode all work great. Sure the font is a bit small due to the relatively low resolution of the display, but the browsing experience is solid with virtually no lags whatsoever. For the said browsing experience, you do need a fast internet connection though (3G would do just fine).

Nokia has included some fine apps that enhance the user experience. Cinemagraph is an amazing app that adds life to an otherwise normal photo. You can only truly appreciate this feature when you see it for yourself.

The camera on the Lumia 620 is decent. By decent I mean good, and keeping in mind the price range, very good. The other department that Nokia definitely gets right is their cameras. Nokia phones are known for their camera quality (and battery life too) and the Lumia 620 is no exception. Sure you won’t get PureView level quality with the 5 MP sensor at the back, but it does pull of decent shots. Have a look at the camera samples included to judge for yourself. The camera is aided by an LED flash which is powerful, but like most smartphone cameras performs just about average during night time.

The Lumia 620 can record videos at 720p. Videos are simply okay. Nothing outstanding, just plain okay. The phone can playback 720p videos without any dropped frames (thankfully). We really don’t expect anybody to be watching movies on a phone with a 3.8 inch screen size, but just so you know it plays back content just fine.

The Lumia 620 comes packing with a measly 1,300 mAh battery. Now if this were an Android smartphone, this would be a serious concern for us. However, Microsoft’s Windows Phone OS is known to be efficient, and Nokia has always proven itself in the battery department as well. This holds true for the 620, to an extent. Despite the minuscule battery size, the phone lasts a full day of moderate usage but you have to, have to put the phone on charge every night. Nokia could have packed this bulky phone with a bigger battery. But then again, the next model in the series (the Lumia 720) addresses that.

Nokia was in a tough position one year ago. Having completely abandoned their Symbian line up and closing the doors to an Android device, it was a perform or perish situation with Microsoft’s Windows Phone platform in this ruthless market. Cut throat competition in the form of Apple iPhone and Android offerings such as the Samsung Galaxy S3 left no room for error. Nokia had to get it right this time with Lumias. 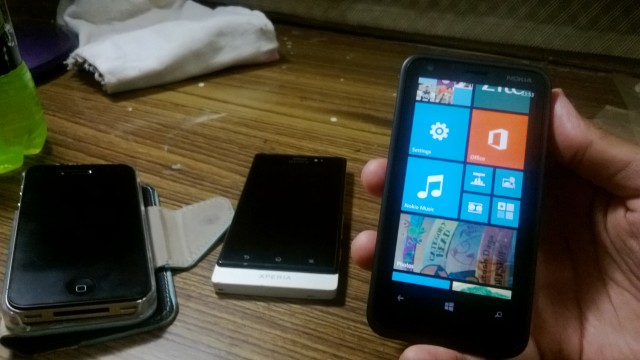 Fast forward a year, and we see that Microsoft’s latest Windows Phone 8 platform really took off. And a major credit also lies in Nokia’s craftsmanship. With their new WP8 Lumia line up, Nokia literally stole the show and Windows Phone started showing a positive growth, eating away into the iPhone and high end Android territory. However, a major chunk of the market lies in the mid-range devices, and Nokia had yet to make a solid offering in that range.

Enter the Lumia 620. Running the same Windows Phone 8 OS as the Lumia 920 and the Lumia 820, the 620 is Nokia’s cheapest Windows Phone 8 offering. By cheap, we mean as low as Rs. 14,230 cheap (as on Flipkart.com). The affordable price tag worked, and the device has received a more than warm response from the Indian crowd. The Lumia 620 clicked on all necessary fronts. For Rs. 14,230 we really couldn’t ask for more (save for a slightly bigger battery perhaps). We don’t have a hard time recommending this phone to anybody wanting to buy a smartphone in the Rs 15,000 price range. Expect even better response from the upcoming (and notable cheaper) Lumia 520.